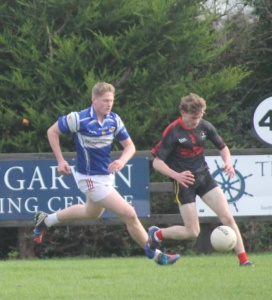 Dungarvan CBS qualified for the Munster C under 19 football championship quarter finals on back of a three goal victory over local rivals St, Augustines at the Abbeyside/Ballinacourty grounds on Wednesday November 17th.

St. Augustines enjoyed the better start with goals by Seanie Callaghan and Rory Fennell inside the first five minutes.  When the CBS eventually got their hands on the ball, Tom O Connell made it a soccer scoreline at 2-1 and then Augustine’s goalie David Byrne made one of his many fine saves throughout the hour when he denied Peter Cummins an equalising score.

Augustines centre forward Charlie Treen scored the first point of the game in the 7th minute to keep the initiative with the leaders but their midfielder Brayden Dee Carter  picked up a black card shortly afterwards and the game soon swung the CBS way.

The two number 10’s Rory Fennell and Sean Condon traded minors and the sides were level for the first time after Tom O Connell placed Peter Cummins for a well taken goal, 2-2 each. Both sides then had a goal scoring opportunity and it was the CBS who made better use of theirs when Eoin O Callaghan blasted home the ball. Tom O Connell pointed a free and just before the water break, Mark Mahony pointed for the Friary which left his side trailing by 3-4 to 2-3.

David Byrne again showed his potential to be a top class keeper when he denied goal scoring efforts by David Butler and Tom O Connell but the latter did get the better of him from the penalty spot before half time.

The CBS were well on top but they wasted many chances and in the lead up to the break, all they had to show for this were minor scores by Eoin O Callaghan and a contender for score of the match by Peter Cummins. Tommy Fennell was on target for the Friary as the half time score favoured the CBS by 4-6 to 2-4.

Back to numerical equality and St. Augustines started the second half well with scores from play by Darragh McGrath and Seanie Callaghan. The CBS won the second moiety by 1-5 to 0-6 but they drew the Friary on them by playing very defensive with one eye on St. Augustines sub, Stradbally senior player, Mikey Mullaney at full forward, who didn’t start due to injury.

A superb score by Charlie Treen negated a Tom O Connell pointed free and goalie David Byrne was again performing heroics when he denied Sean Condon twice in the one play.

The CBS finished the quarter the stronger with scores from play by Tom O Connell and Rian Walsh either side of a well taken goal by Cillian Ryan. These scores extended the winners’advantage from 0-7 at half time to 0-10 at the second water break on  a scoreline of 5-8 to 2-7.

Friary sub Cian Hogan scored 0-3(2f) at the start of the final quarter as the CBS stayed in defence but they went on to score the final 0-2 via Peter Cummins and David Butler to run out deserving winners of this latest local schools’ derby.

Score of the Match :  Charlie Treen’s 42nd minute point from play for Augustines.