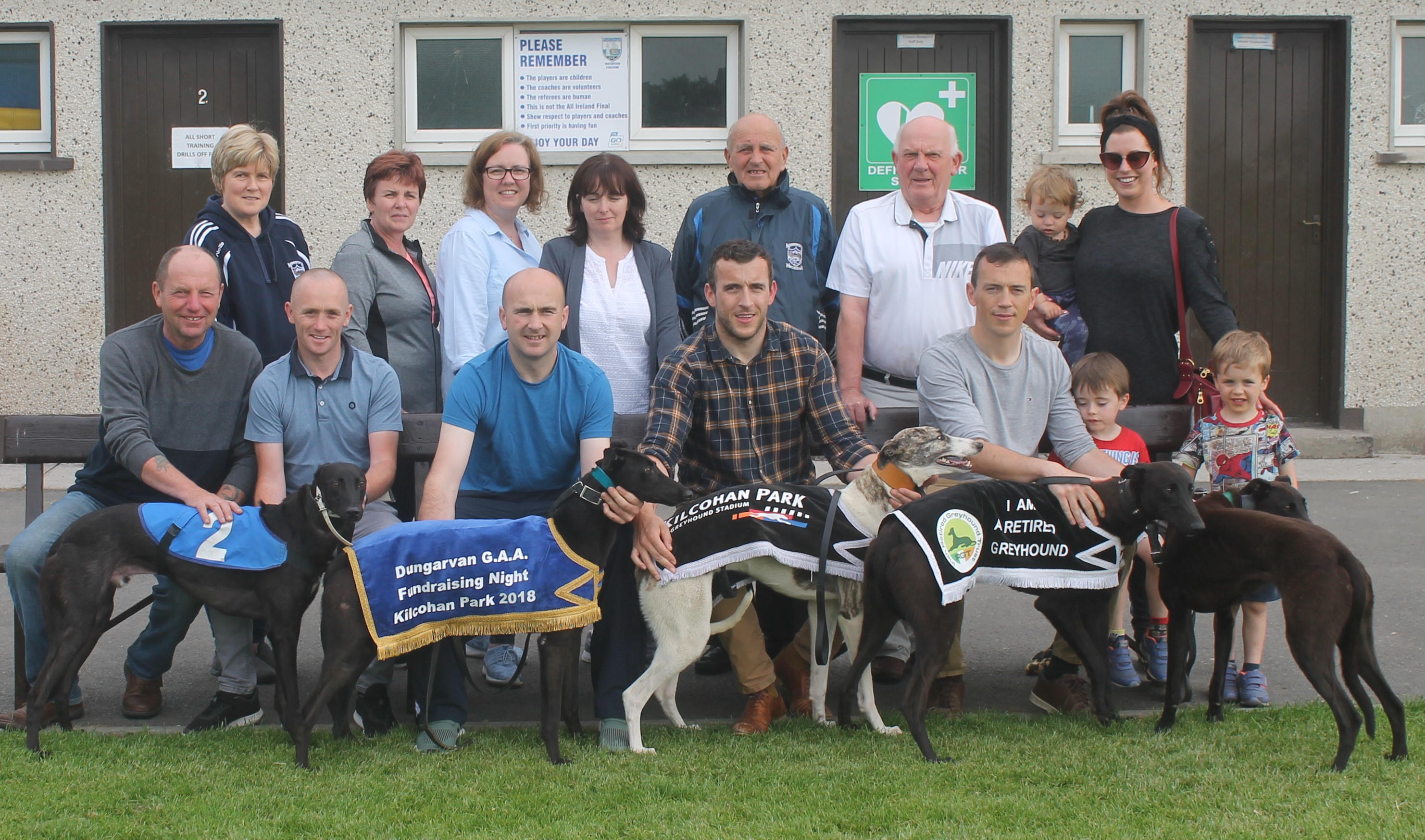 THIS CLUB IS GOING TO THE DOGS

Pictured at the launch of the Greyhound Fundraising night are

Our  fundraising committee launched its Greyhound night in Kilcohan Park on Saturday July 14th at our club grounds on Thursday evening. 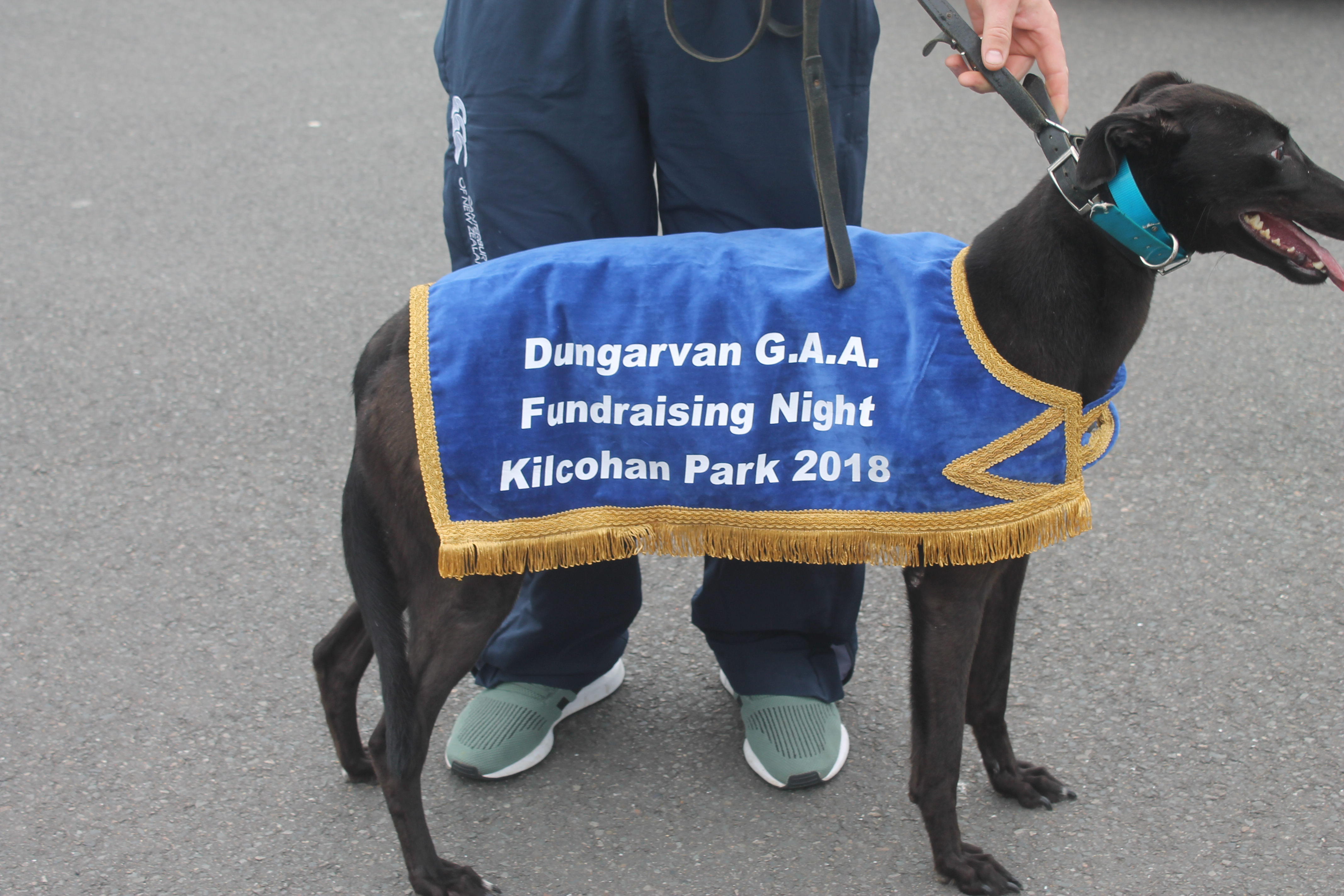 Speaking on behalf of the committee chairman Paddy Fitzgerald welcomed everyone to the launch and thanked Karl Pallas from Kilcohan Greyhound Park for attending.

He also thanked club members Jonathan Regan, Justin Houlihan, Jamie and Pa Hallahan for their help in organising the race night and for bringing their greyhounds along. 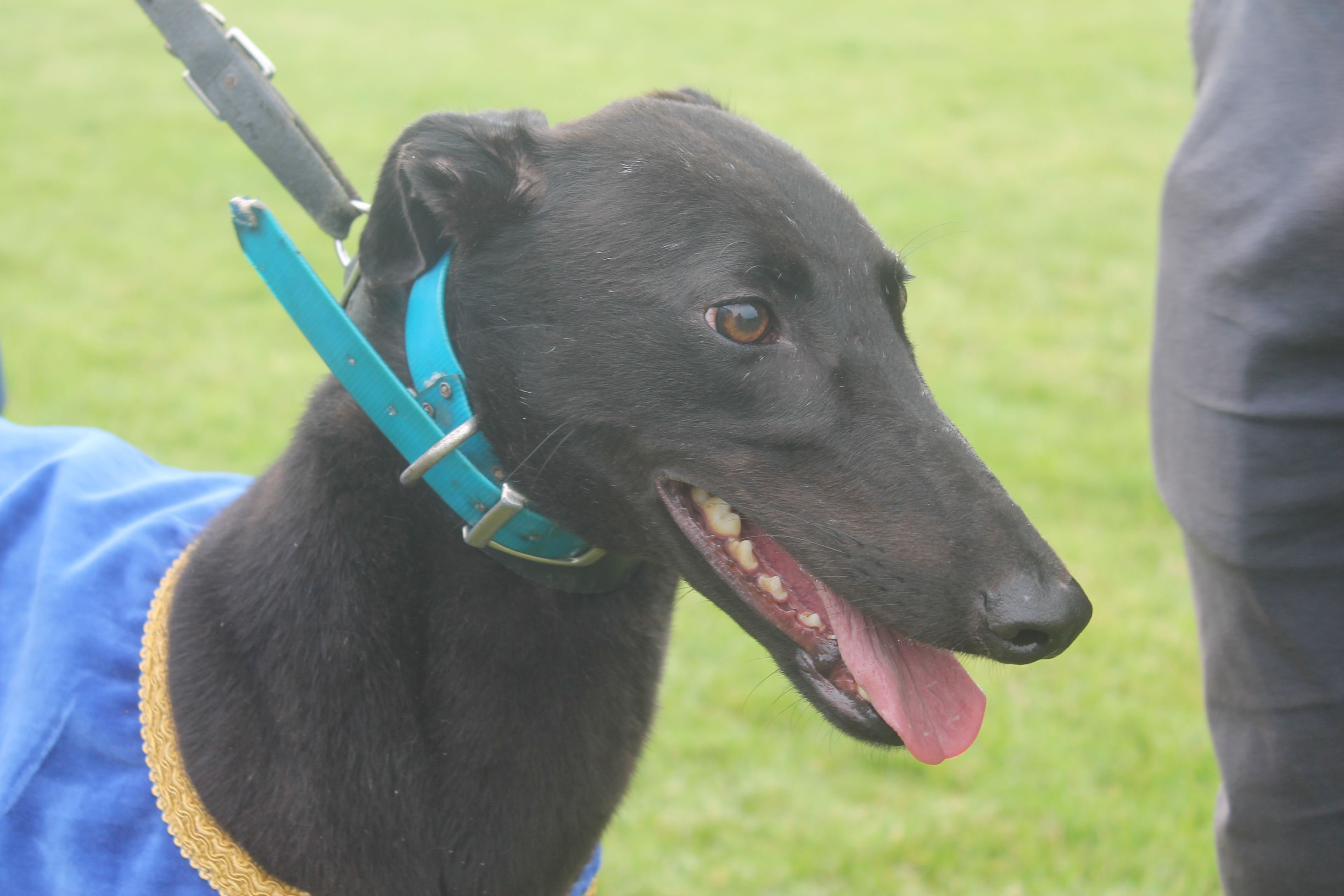 Paddy said that even though this was our first venture into this type of fundraiser  the response to it has already been tremendous and he looked forward to everyone working together over the next six weeks to make this a very successful fundraising venture.

He thanked his fellow committee members for all of the work they had done to date and for attending the launch. 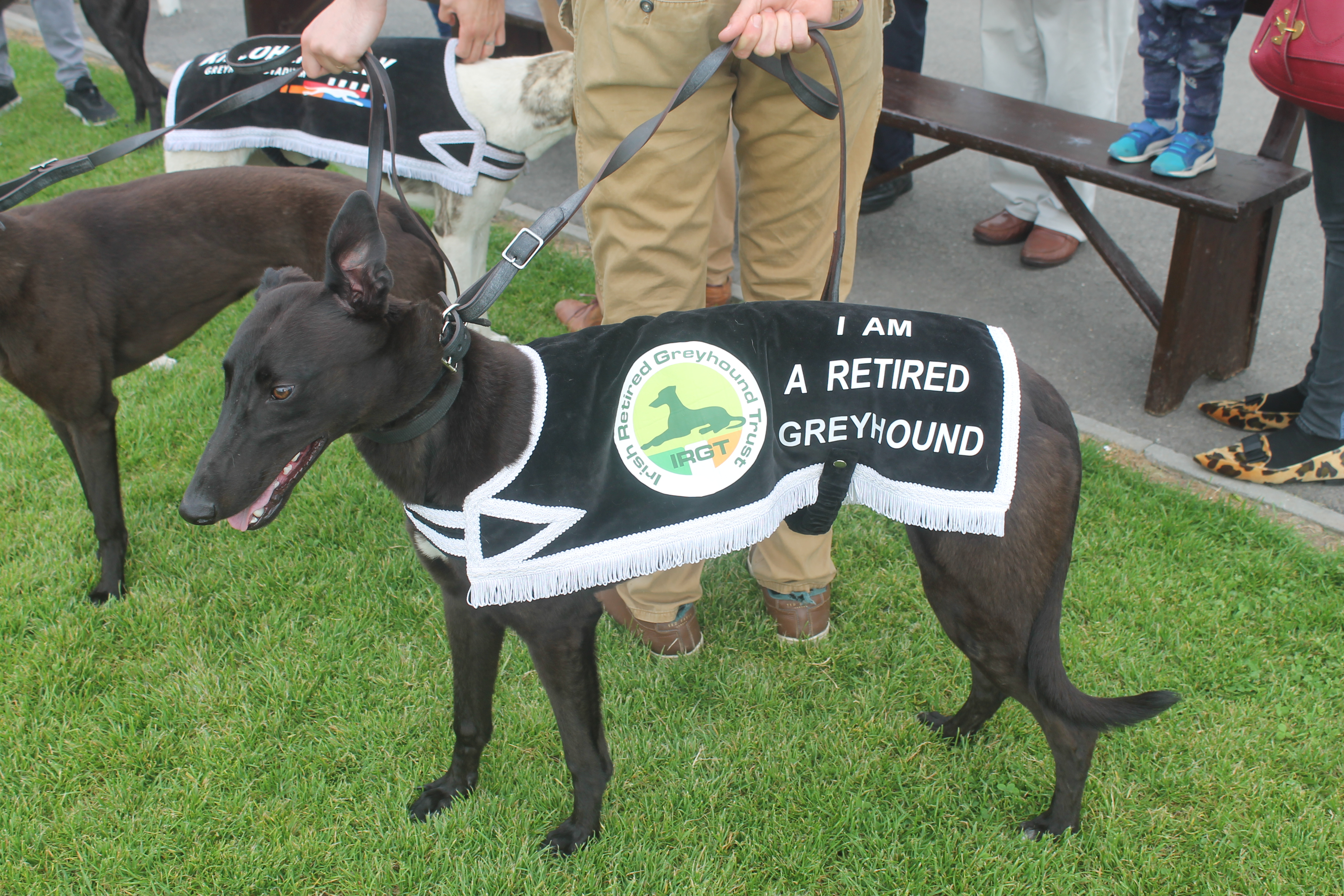 The club will be running a bus on the night to Kilcohan and tickets are now on sale and further developments will be announced as they occur.

Saturday July 14th should be a great night out for the club at Kilcohan where the dining and refreshment facilities are second to none. 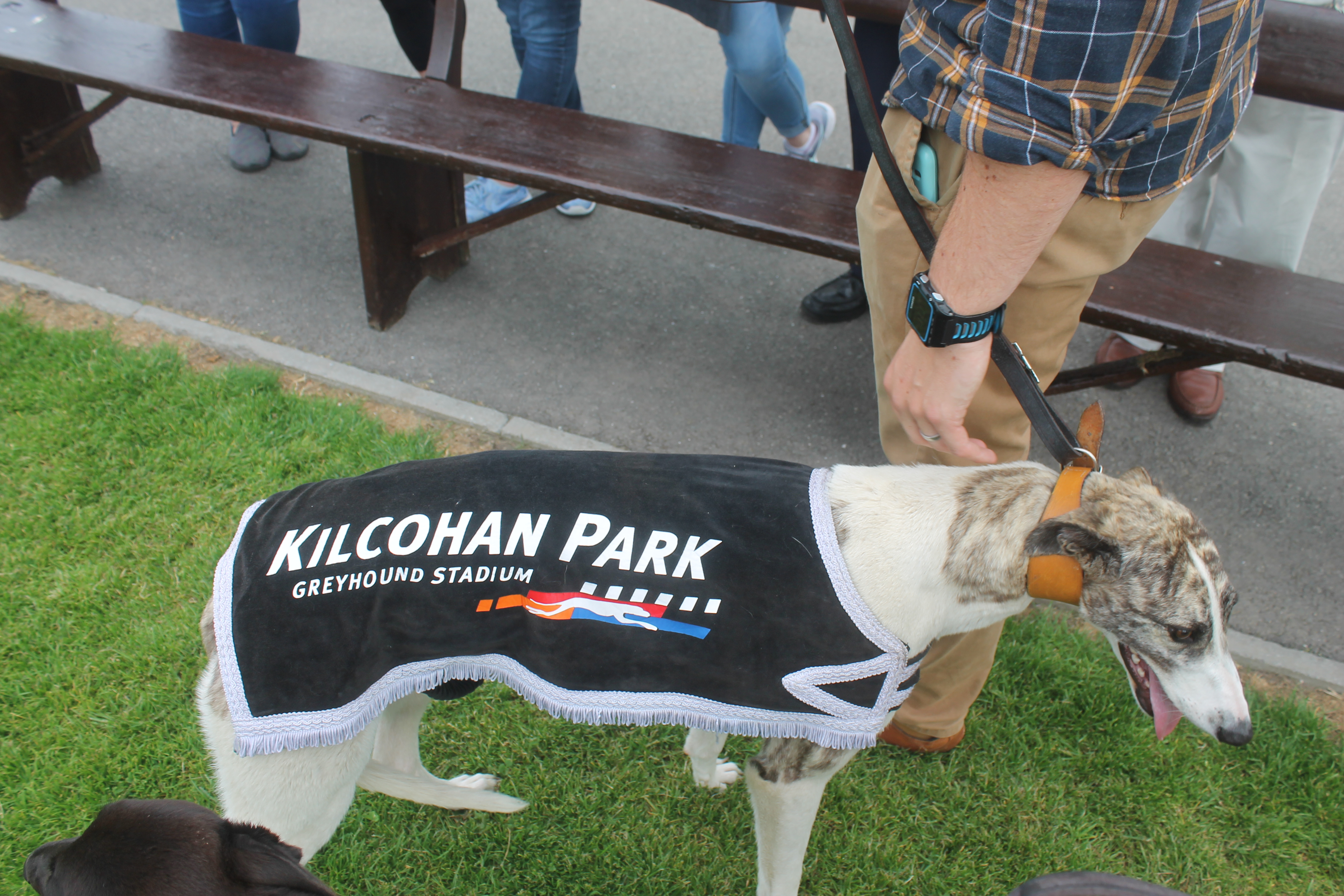 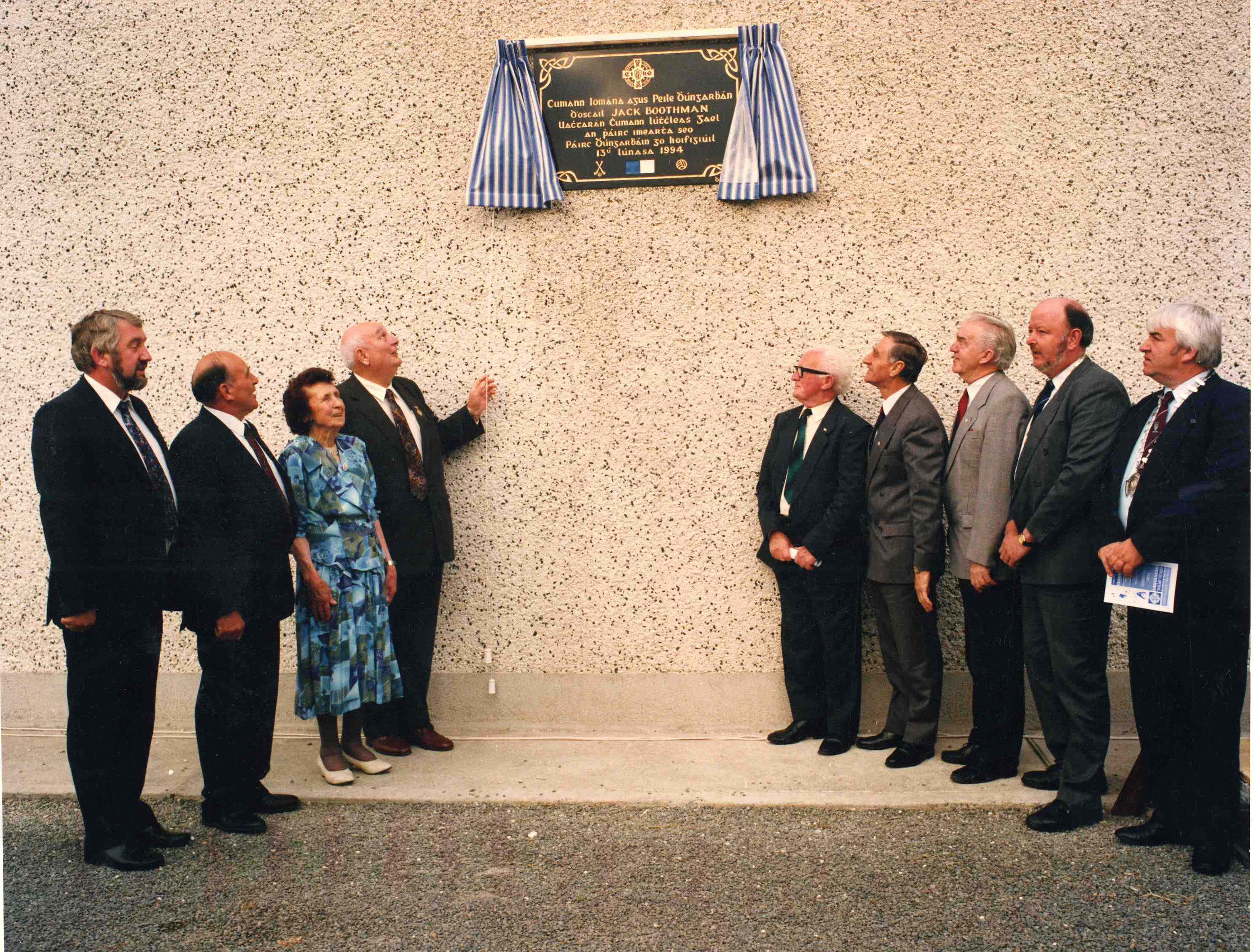 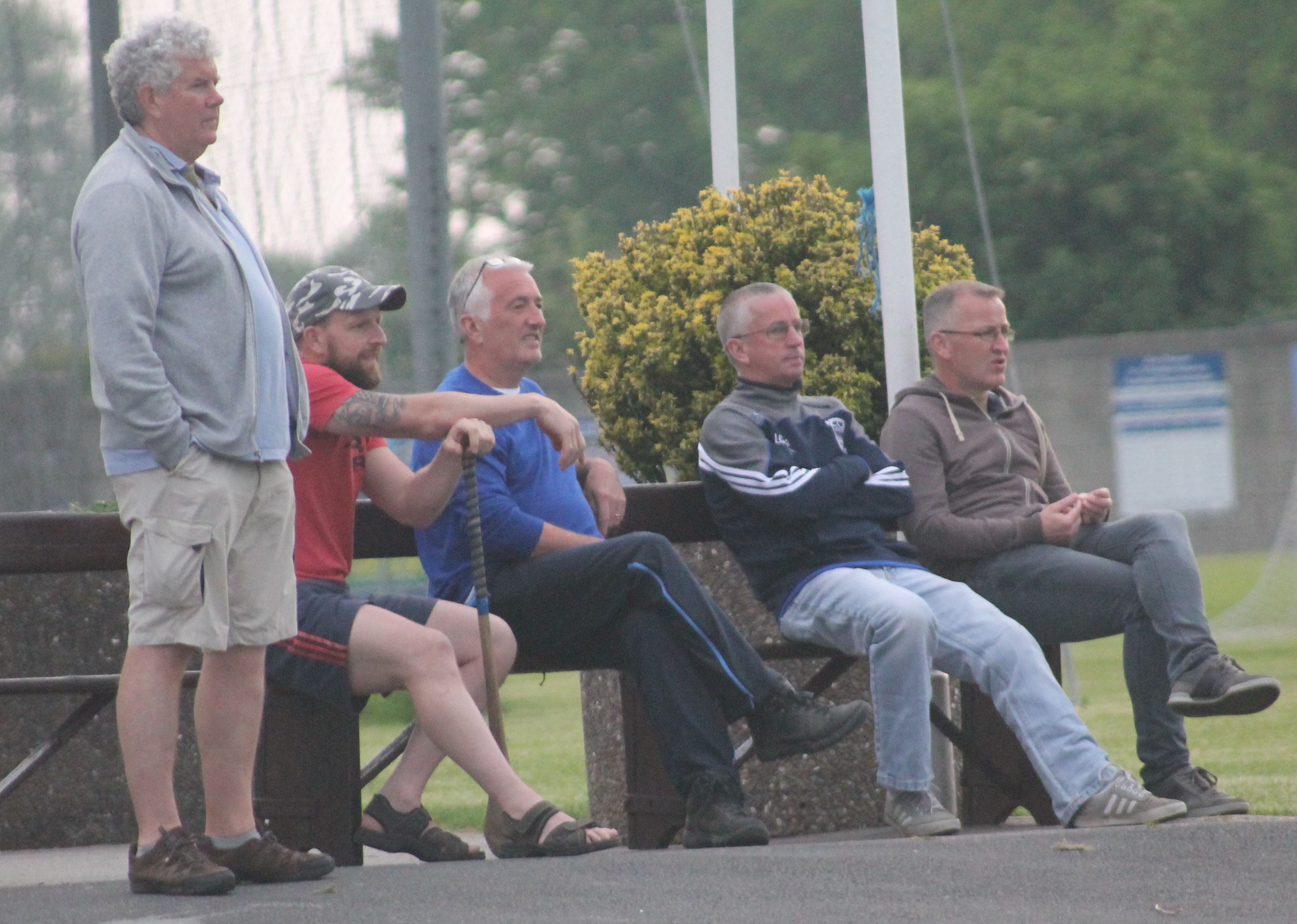 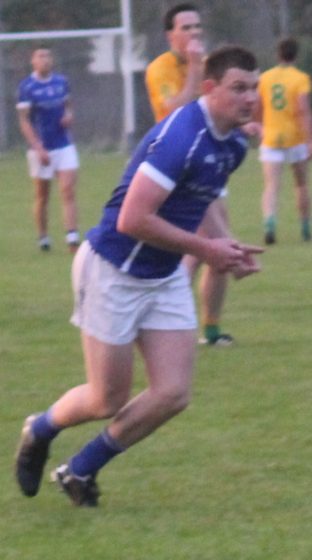 There were two main reasons why we didn’t get something out of this senior football league game which was played in our own club grounds on Wednesday May 30th.

Firstly we conceded three goals inside  the first five minutes when we were slow out of the starting blocks and after a remarkable comeback and the scoreboard reading 3-10 to 1-14, Kilrossanty goalie Paul Whyte made a superb save from Kenny Moore at the expense of a ’45’ with the game in time added on. 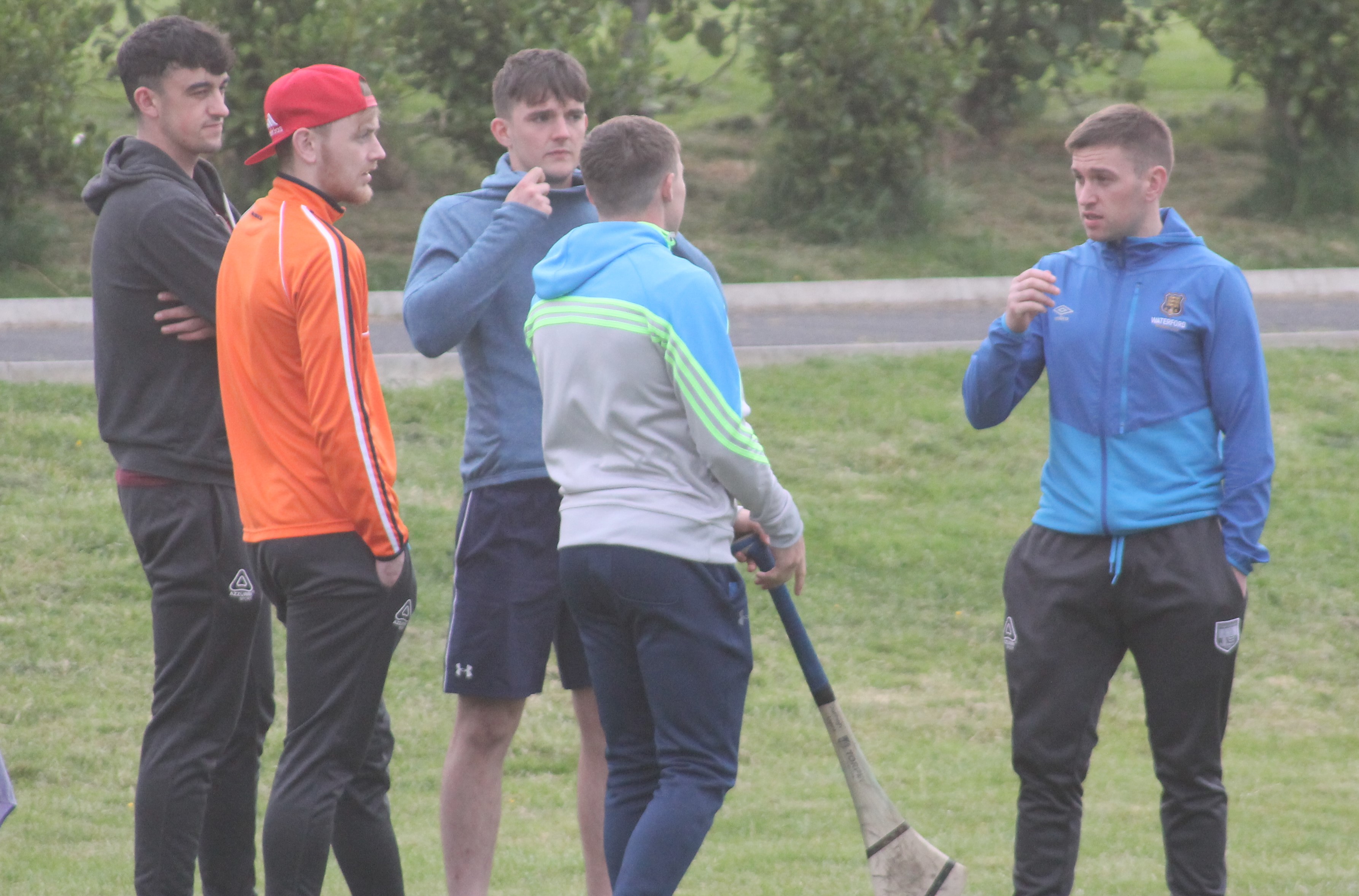 Despite our early concession of major scores the sides were level at 3-2 to 1-8 just before half time with Fionn Hallahan scoring our goal, the outstanding Moore 0-6(1f) and Seamus Hannon and Darren Duggan 0-1 each. 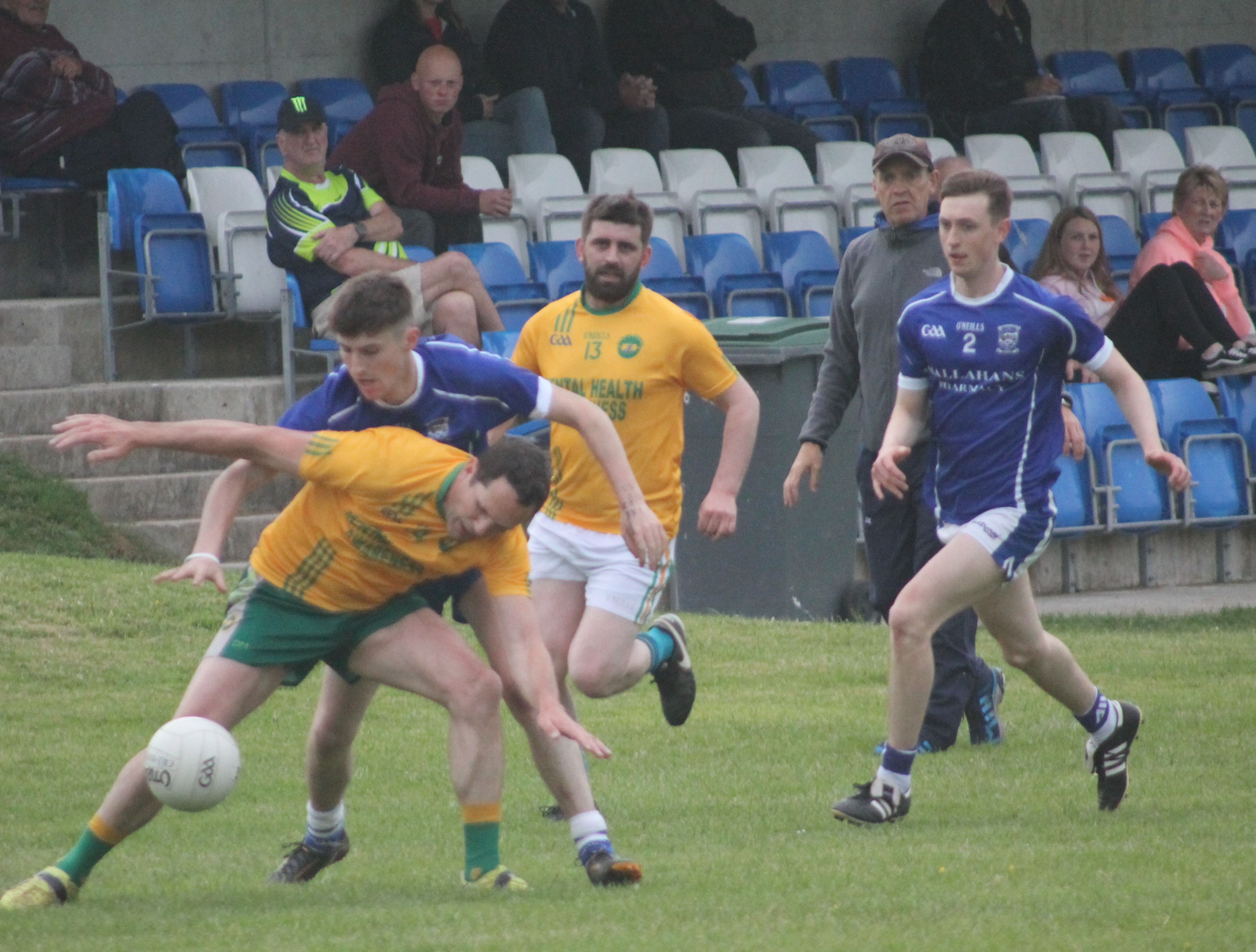 Early second half scores by Moore and Hannon again helped us to level a second time at  3-5 to 1-11 with ten minutes played. However Kilrossanty enjoyed most of the second half possession and they built up a lead of 3-10 to 1-13 with five minutes remaining. 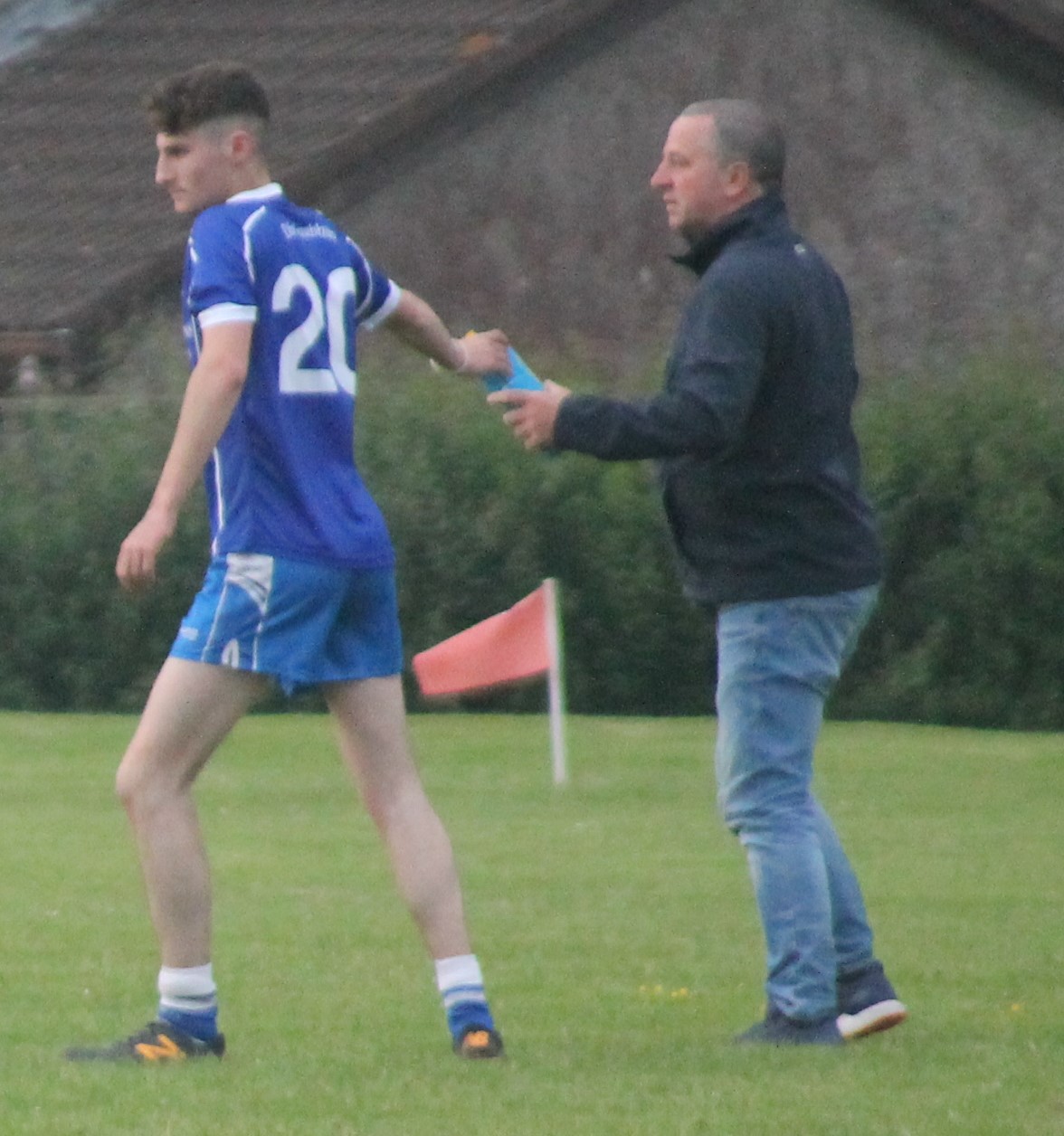 Eventually we got our hands on the ball and Jack Lacey  and Fionn Hallahan(f) kicked points either side of Paul Whyte’s save on  Kenny Moore’s goal attempt. 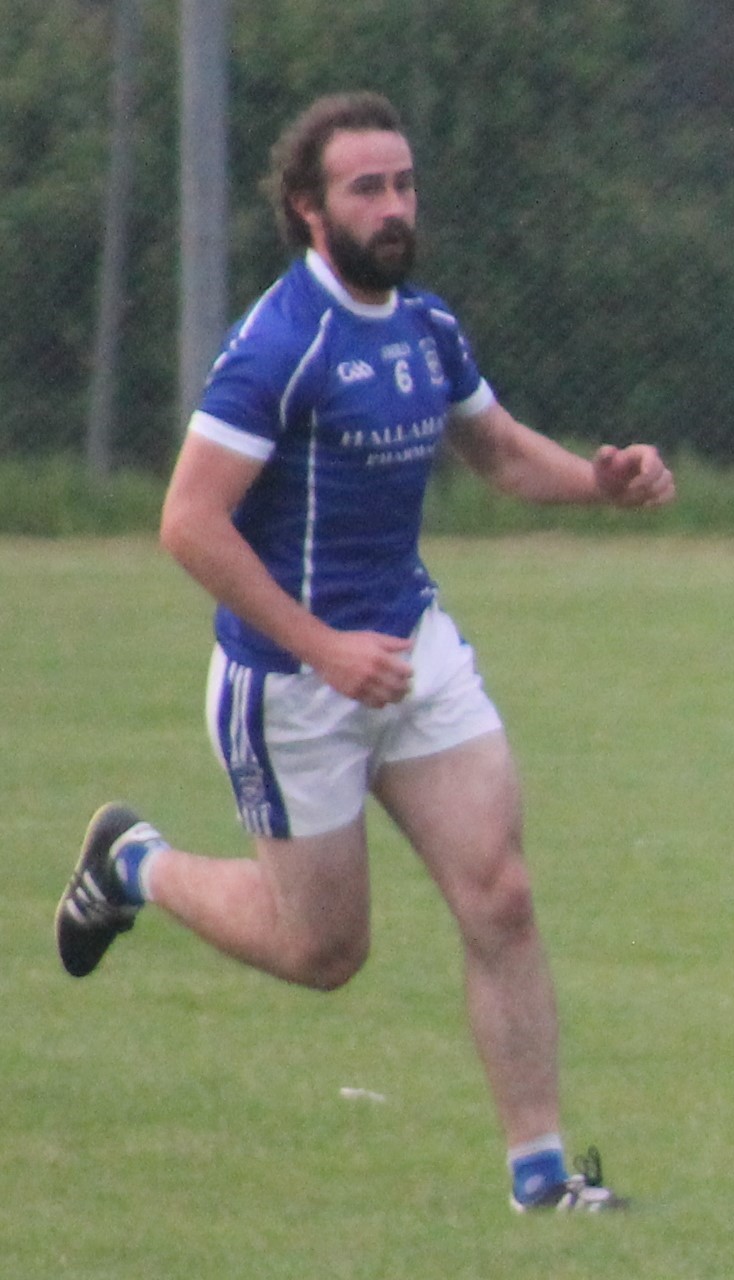 We deserved something out of this game but our slow start to it came back to haunt us in the final analysis. 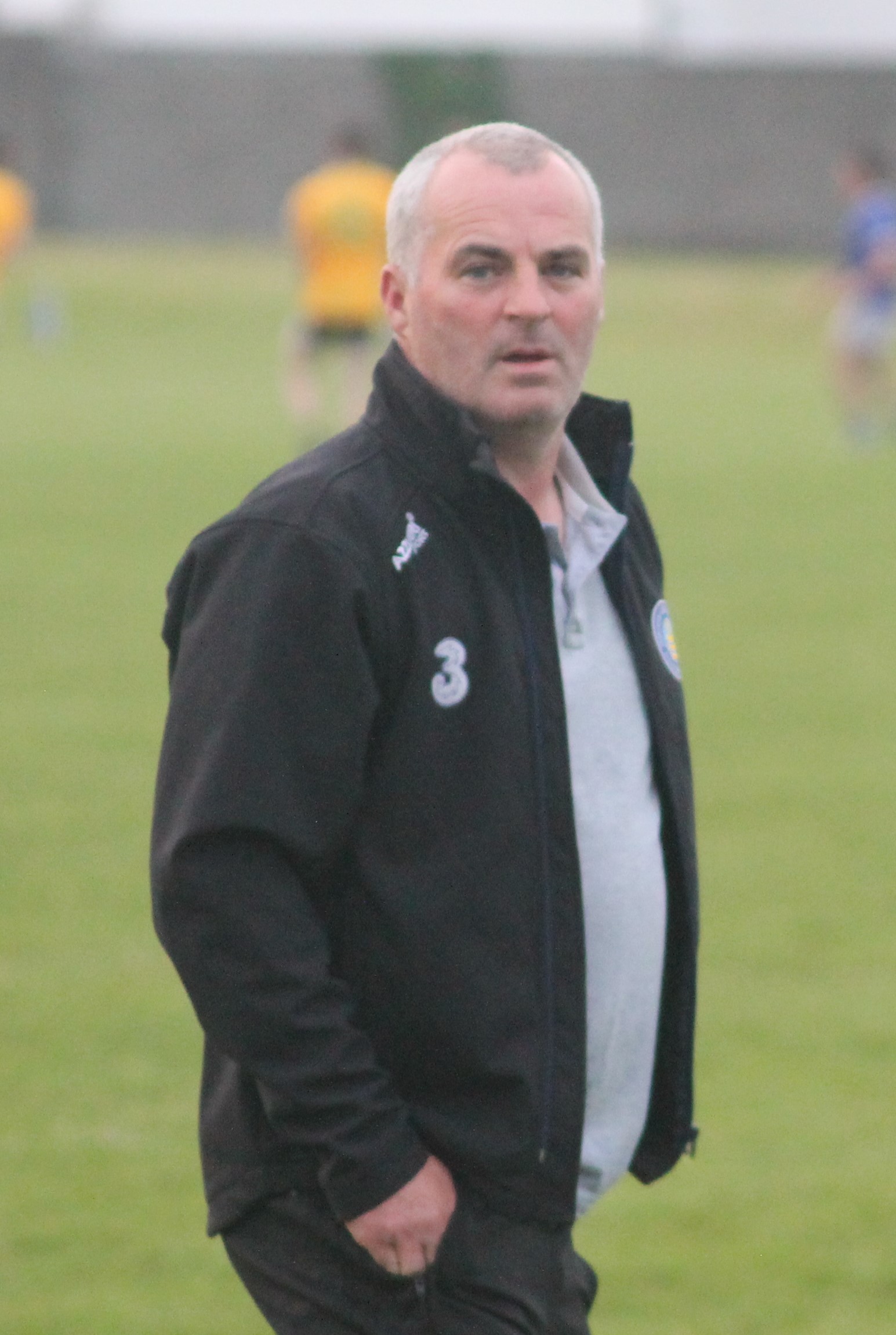 Supporting the team and keeping his hand on his three County senior football medals in his pocket is John John Ferncombe. 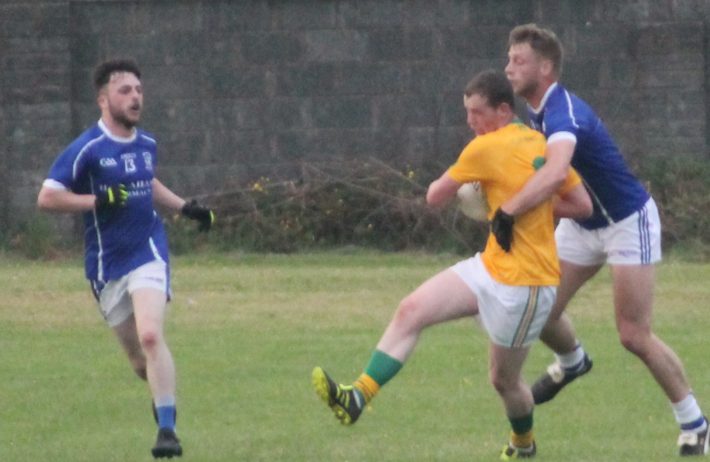 Best wishes to Patrick Curran and Darragh Lyons as the Munster senior hurling championship commences for Waterford in Ennis on Sunday in their first round game against Clare.

In the minor game club player Tristan Loftus is named on the panel of 24 and hopefully he will see some action on the day. 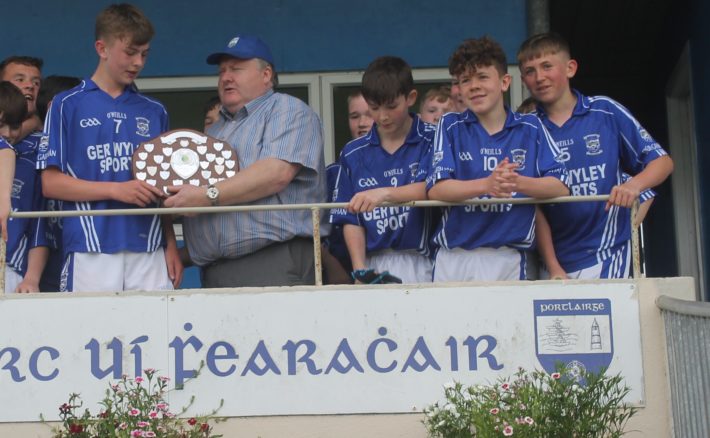 Well done to our under 14 footballers who won the western title in the Fraher F ield on Saturday morning with a deserving 0-7 win over a gallant St. Olivers outfit. 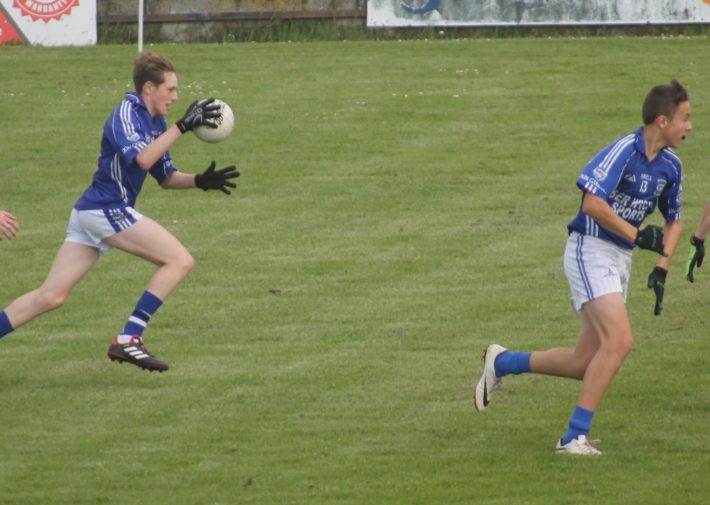 Olivers got a great start to the game when  Shane O Donnell scored an early goal and our luck didn’t seem to be in when a penalty kick by Mark Loftus came back off the crossbar. 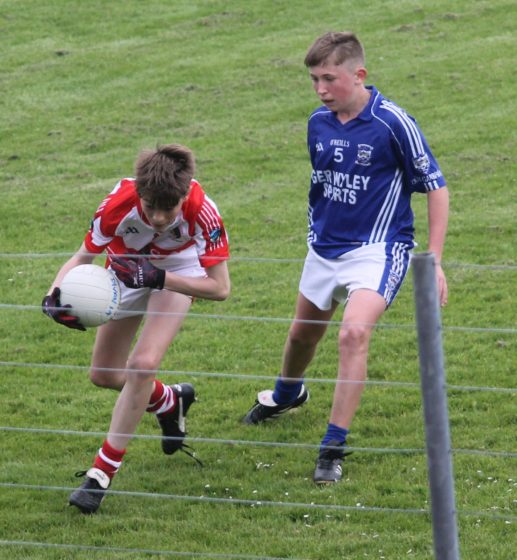 However this well trained team made light of this setback and Mark Loftus returned to score 1-1 to give us the lead. Aidan Mansfield levelled the game  before Kyle Healy set up Fionn Nagle for a great goal and the lead at half time by 2-1 to 1-1. 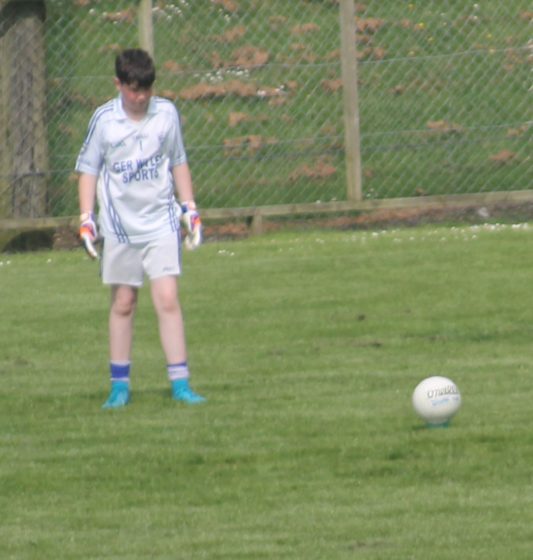 The deadly accurate Mark Loftus pointed his second free on the restart but when Harry O Donovan set up Ben Buckley for Olivers second goal, the game was back in the melting pot. 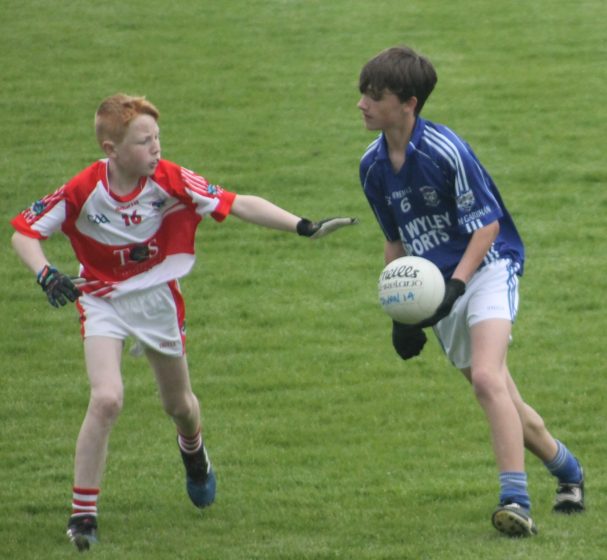 The next score was always going to be vital and Kyle Healy showed great leadership to kick two fine points from play to put us 2-4 to 2-1 in front with ten minutes to play. 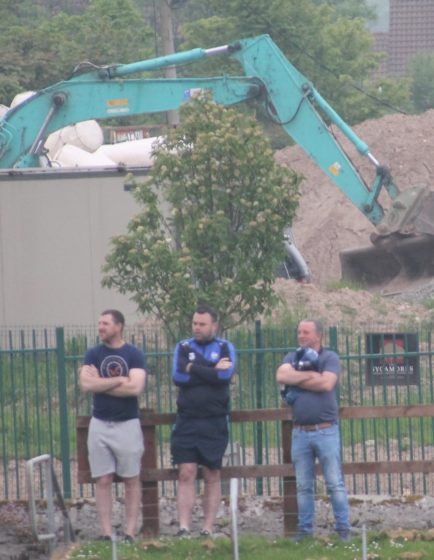 Club Stalwarts from left to right, Eamonn Morrissey, Buddy Power and Wacky Ferncombe  take a break from work to view the final.

Daniel Buckley replied for St. Olivers with their final score but the remainder of the game belonged to the young blues with Kyle Healy scoring a peach of a goal followed by white flags by Mark Loftus and Fionn Nagle to run out worthy winners against good opposition. 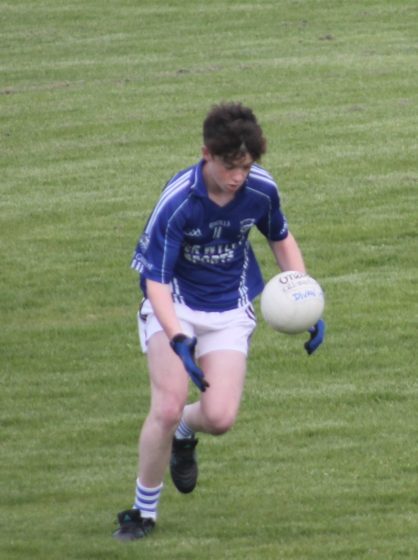 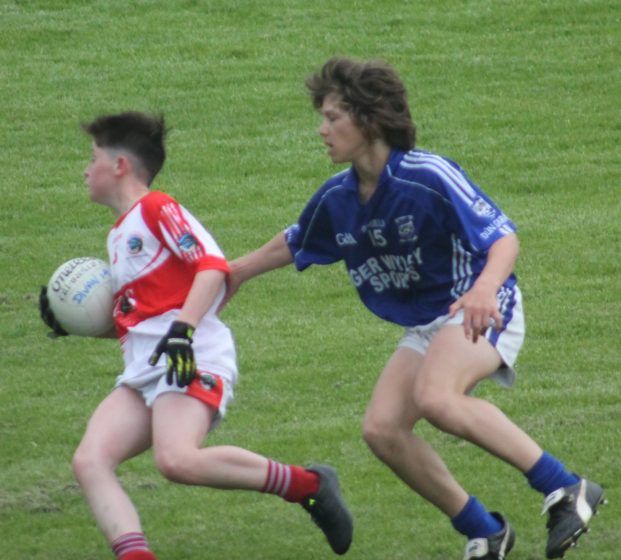 Each and every one of the players played their hearts out on a team that you could see were very well trained by team manager Chris McGovern and his selectors Trevor Galvin, Dermot O Callaghan, David Burke and Pat Curran. 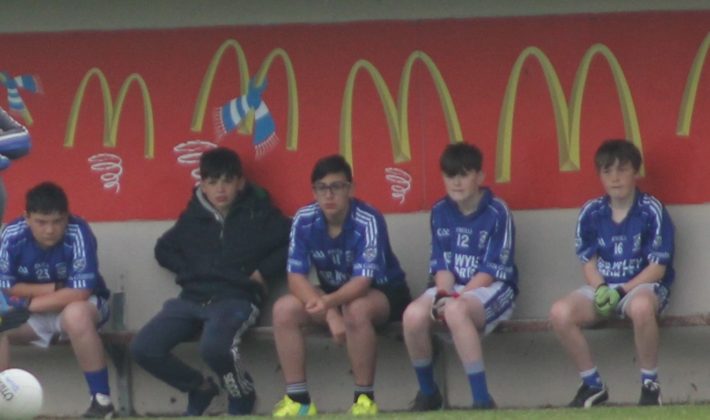 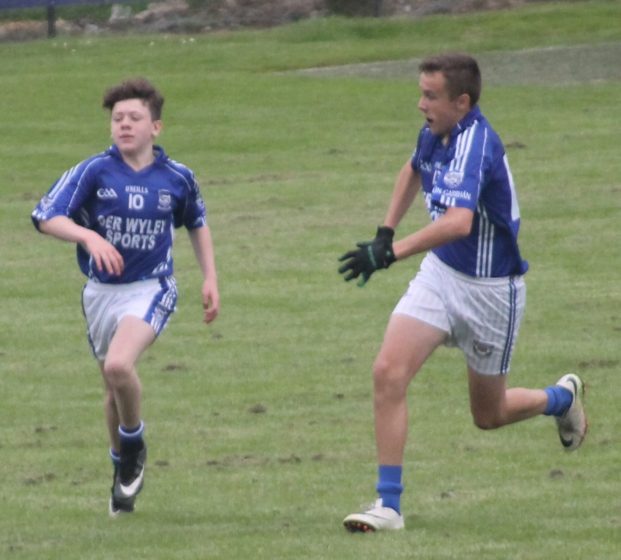 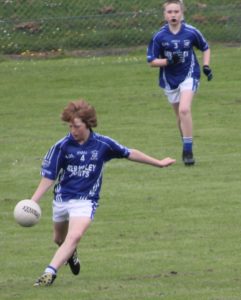 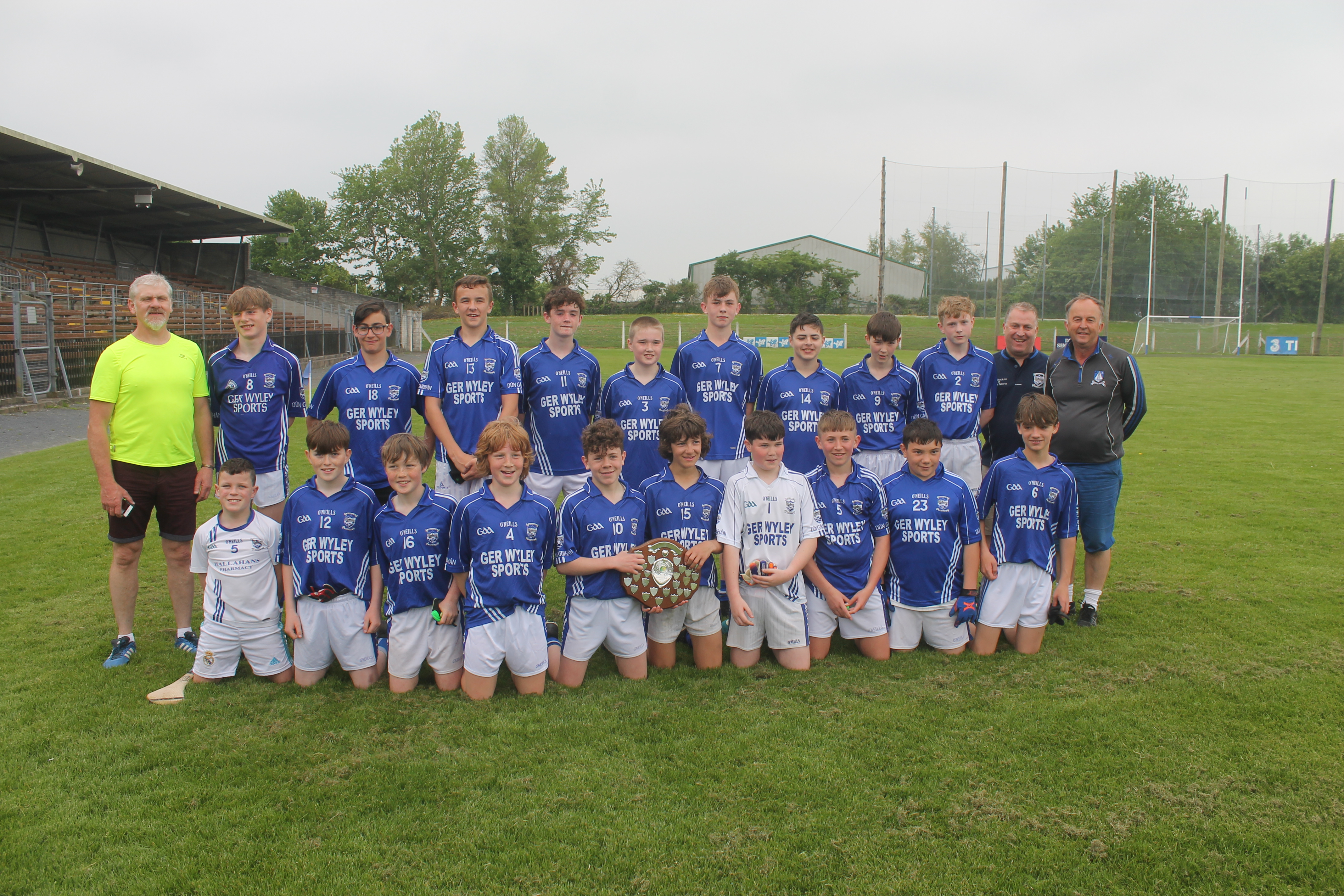 Both teams scored ten times in this junior football championship game in Ballinameela last Friday evening but it was the home side’s ability to raise green flags that carried the day for them. We trailed by 2-1 to 1-3 at half time and despite trying to the very end we lost the second half by 2-5 o 0-6.

Features of the game from our point of view were two great saves by Craig Beary in goal, while Tadhg McCombe’s penalty effort went just centimetres over the bar.

Our final group game is this Friday June 1st v Kilrossanty in Leamybrien at 8pm.

Senior football league
Our senior footballers were defeated by Rathgormack in the senior football league on Sunday morning last on a scoreline of Rathgormack 2-12; Dungarvan 0-11. Our next fixture in the league is this  saturday the 26th of May when we  host Kilrossanty. This game has a 7.00 p.m. throw-in time.
Junior football
Gaultier 6-15; Dungarvan 1-11
Last year’s finalists Gaultier proved to strong for us in the second round of the of the junior football championship played in Clogherane on Friday night last.  Credit to our  players who battled away  while  playing  in this higher grade for the first time as our current senior side won the intermediate championship last year.
Team Glenn Power, Conor Donovan, Ger Cusack, Sean Hyslop, Gavin Power, John Havens, Peter Queally, Ian Sheehan, Brendan Cullinan, Tadhg McCombe, Fionn Hallahan, Stephen Donovan, Liam Ryan, Conor Duggan.
Munster senior football
championship
Although the scoreline reads that Tipperary were 12 point winners over Waterford, the Deise did give a very spirited and hard working display in Thurles on Saturday night last. Club players Gavin Crotty and Kieran Power gave outstanding performances for their county while Joe Allen and Michael Kiely deservedly saw action also when coming on as second half subs.
u-14 football
Well done to our under 14 footballers who had a comprehensive victory over Cappoquin in the semi-final of the under 14 division 3 football championship.
Ticket Orders
Orders for tickets for Waterford v Limerick in the Munster senior hurling championship match in Gaelic Grounds Limerick on Sunday, June 10th are now been taken on 087 7977272.  Any ticket orders are non returnable. Ticket prices are €20 adult stand, €15 adult terrace,      U-16s €5.
U-11 town and country
On Friday night last the 11th we were defeated by the minimum of margins   in a physical game against St. Olivers in the  the u-11 Town and Country League. This was a tightly contested match and the boys were a little unlucky perhaps to not at least get a share of the spoils.
Team: Jamie Nagle, Luke Irwin, Sean Cummins, Raymond Kelly, John Meehan,  Luke Power, Billy Hickey, Adam Mulligan, Brandon Dillon, Rory Beresford, Tony O’Donnell, Will Healy, Adam Mulligan, Dominic Trzeciak, Seanie  Cummins, Callum Daly.
Ballyduff tournament
Our under 10s made the annual trip to Ballyduff on Saturday morning last to participate in the now infamous Ballyduff tournament. First opposition for the boys were St. Catherine’s who proved to be a a most formidable oufit and proved to strong for the boys. Second game was to prove to be another titanic battle but this time the sides could not be separated and a draw was the outcome.
Our third and final game was against Ballygunner and with the benefit of the two previous games under their belt the boys put in a terrific performance to run out worthy winners. Unfortunately, our efforts were to prove in vain as scoring difference decided we would not progress in the competition.
Team: Ryan McGovern, Jacob Dalton, Pierce Quann, Daniel Healy, Toby Moore, Ronan Gleeson, Cormac Silke, Callum Fitzgerald, Lee Duggan, Joey Morrissey, Charlie Crotty, Oisin Hallahan, Corey Lyons.
Camogie news
Our under 14s played out an exciting last group game against Lismore on Tuesday night last in Clogherane and were unlucky not to have got a result on the night. Both teams played some great hurling in what proved to be a great battle. The girls now move onto the knockout stages where they were down to play St. Annes last night.
Team: Abbie Fitzpatrick, Caoimhe Meehan, Kerry Dee, Abi Power, Roisin Quann, Sarah Power  Katelyn McGovern, Misha Lyons, Emma Fitzpatrick, Ellie Shead-Hackett, Emma O’Neill, Aoibhe Bluett, Katie Donnelly, Caoimhe Prendergast, Rebecca Donnelly, Claire Whelan-Power.
Junior Camogie
Well done to our Junior camogie team who were victorious over Butlerstown in the junior league final. Well done girls on a super and hard working performance. Great determination shown by everyone. League champions two years in-a-row.
Night at the Dogs
The club is holding a night at the dogs on Saturday, July 20th in Kilcohan Park, Waterford. We will be running a bus on the night, all are welcome young and the not so young. More details in the coming weeks or if anyone wants more info the can contact Eleanor McGarry. This promises to be a great night and the committee have been hard at work to ensure its success.
Sympathy
Dungarvan GAA extends its deepest sym-pathy to the Kiely family on the recent death of Tom Kiely, Silversprings. Ar dheis Dé go raibh a anam.
Cul camps
Cul camp dates for Dungarvan are 23rd July to the 27th of July. Bookings can be made through coordinator Niamh Harty on 087 9241532 or online at Kellogg’sculcamps.gaa.ie. Anyone that books online during the month of May will be entered into a draw for a free place and a signed Waterford jersey.
Deise Draw
Deise Draw is commencing this month with the first draw taking place on the 30th of May.
Club news
Keep up to date on all club news on our re-  gularly updated website that has all fixtures, results and all news that’s happening within the club. You can also keep up with club happenings through facebook and twitter.
Lotto
Dungarvan GAA lotto results. Numbers drawn 4, 9, 17, 29.  No winner.  Next weeks jackpot €9,400. Four match three numbers €50 each: Jane McGovern, Thomas Fitzgerald, Christy Havens and Eimer Crotty.
Lotto is available from Hallahan’s Chemist, Paddy Foley’s bar, Country Store, John Walsh Spar, Johnny Lynch, Quealy’s bar. Tickets €2 each or three for €5.
_________________ 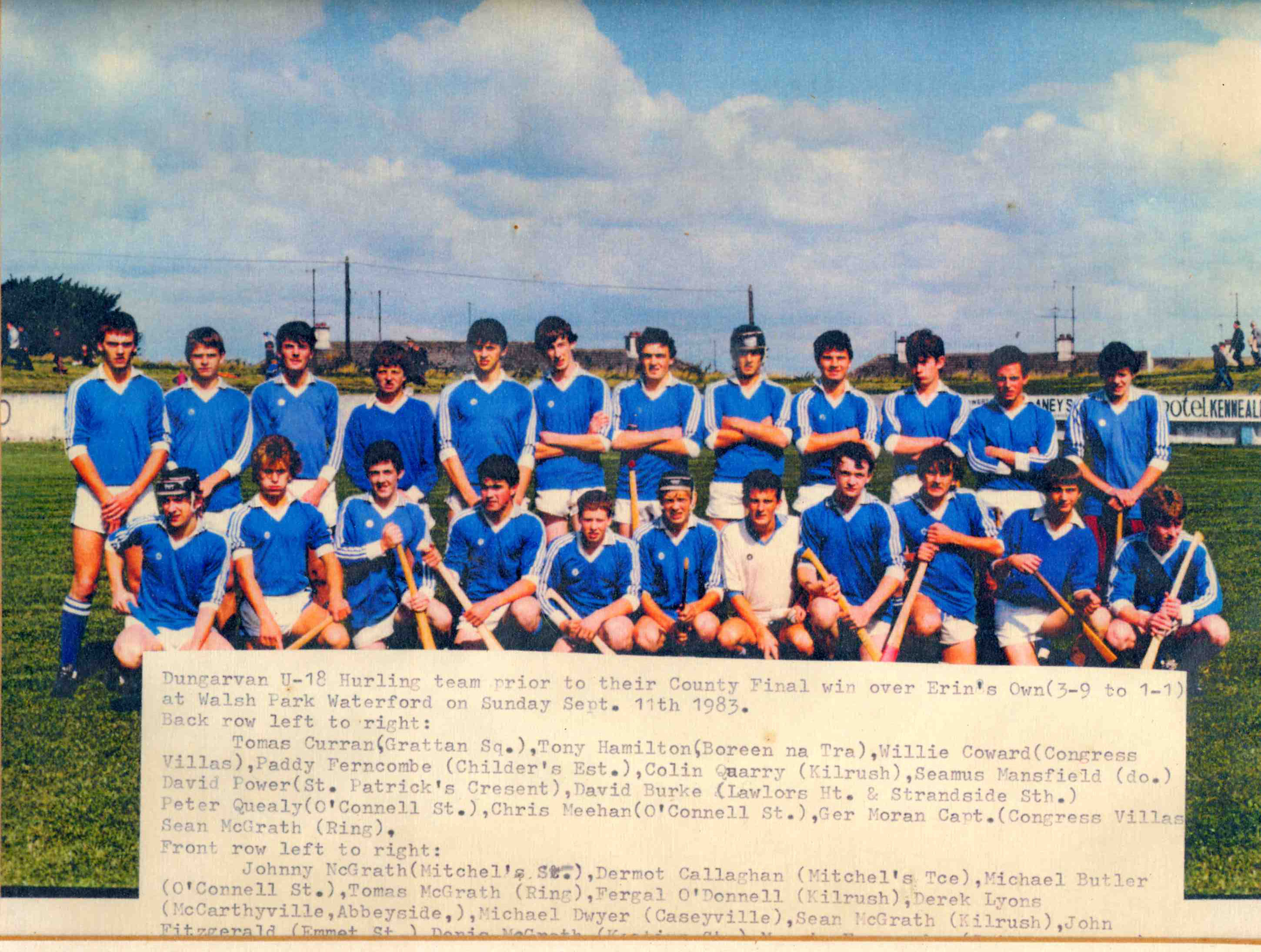