One of the many projects promoted by our Fundraising committee is the Christmas Draw, the proceeds of which are important for the day to day running of the club. This year’s raffle is being held in Paddy Foley’s on Monday the 17th of December and there is plenty time to  to purchase some tickets.

Thanks to our fundraising committee for all of their hard work behind the scenes and to everybody who is buying and selling  tickets.

if you are away from home and would like to support the club please send your contribution to Fundraising chairman Paddy Fitzgerald at 7 Emmetts St. Dungarvan or contact the club secretary at 087 7657805. Mile Buiochas. 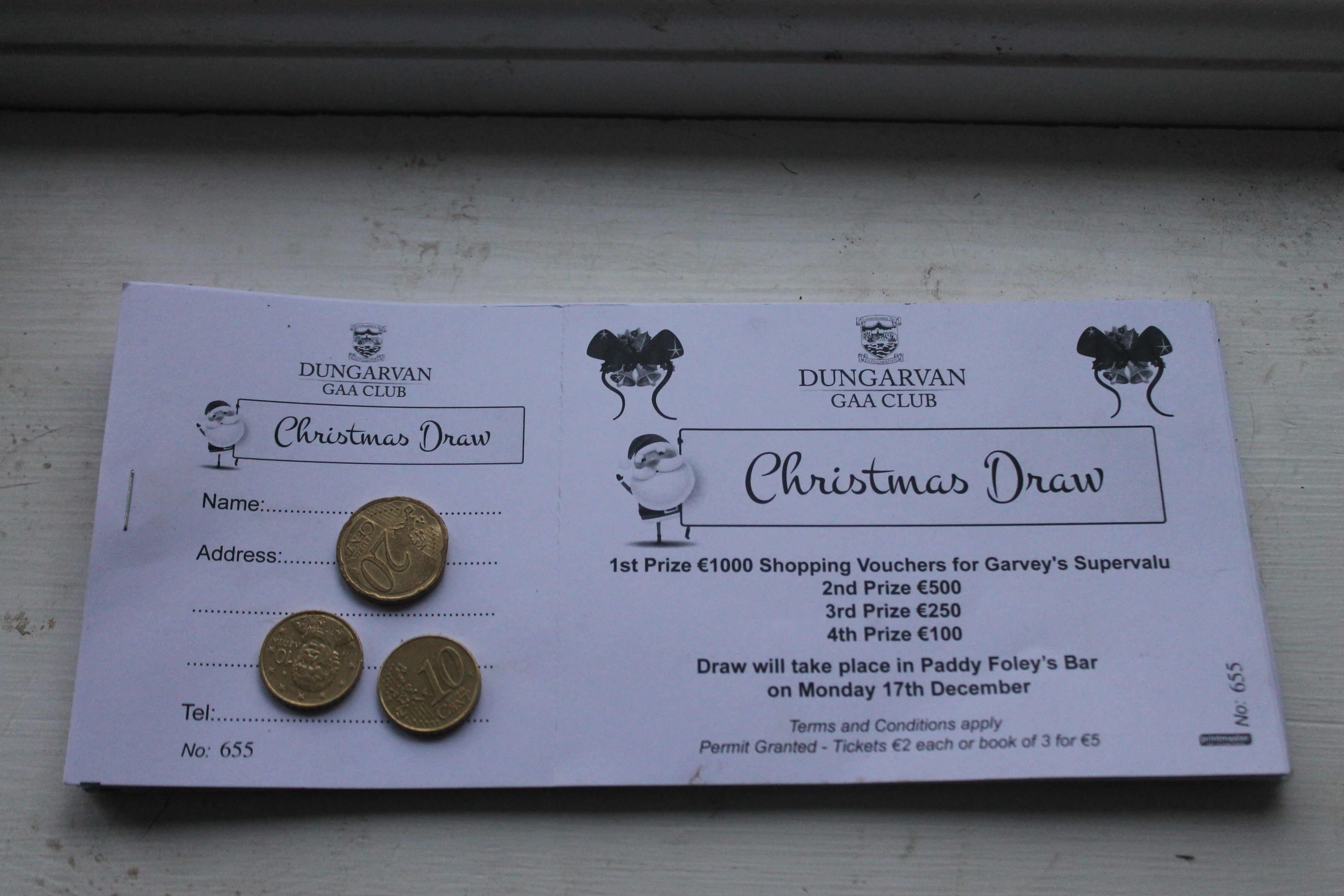 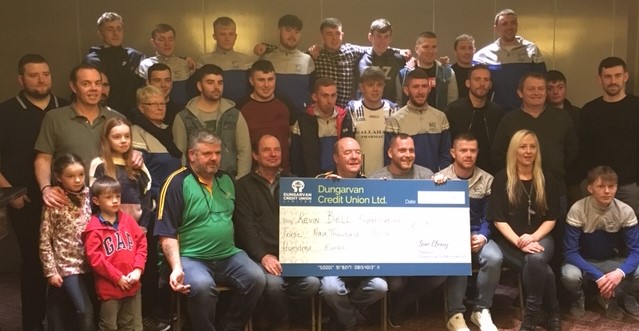 A pleasant function took place in Lawlors Hotel last Saturday  evening when the proceeds of this year’s David Houlihan Memorial Long Puck were presented to the Kevin Bell Repatriation Trust.

In its third year, following last week’s presentation of £9,600, the total amount raised by the Houli Long Puck to date is a very commendable total of £40,000.

Well done to the local Long Puck Committee and every body who has helped with the organisation and everybody who has participated  over the past three years in making this event such a success and in remembering our ever popular member David Houlihan, who lost his life in Thailand in 2015.

Thanks to Colin Bell and Kevin Heaney for travelling to Dungarvan last Saturday to accept this year’s proceeds.

The Dungarvan club is delighted and honoured to be associated with such an important fundraiser each year.

In a very well contested game, we led at half time by 1-4 to 0-6 after trailing by 0-5 to 0-1 at the end of the first quarter. A 17th minute close range goal by Liam Ryan and minor scores by Kealan Barry and Sean Ryan (0-2, 1f) gave us that slender lead at the break. 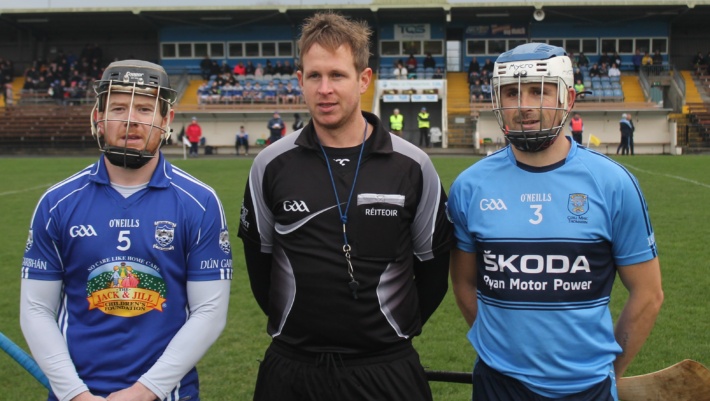 With the aid of the slight breeze we led up to the end of the third quarter on a score of 1-7 to 0-9  but Kilmac’s superior fitness kicked in for the remainder of the hour and they led by 0-13 to 1-7 with 59 minutes on the clock.

Credit our boys, they dug deep to save the game and a goal from an acute angle by Luke O Callaghan in the 61st minute gave us an overall deserving share of the spoils. Both teams had the opportunity to claim the win in added time but overall a draw was an equitable result.

This was a very sporting game throughout and well done to both teams for the excellent fare they produced for both sets of supporters. 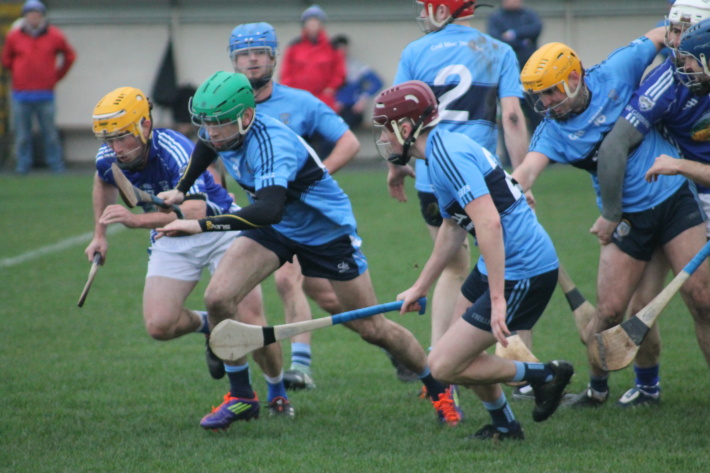 Johnny Lynch, on left, battles against the odds in the  Fraher Field against Kilmacthomas.

The Dungarvan club has learned with deep regret of the death of former player Nicky Quill, Dunlaoghaire and formerly of the Pike which occurred in  in Dublin on the 8th of November. To the older generation in our club and indeed in a number of other ones which Nicky played with, the name Nicky Quill would be well known as he was a fine exponent of both hurling and football.

One of the Quills of the Pike in Dungarvan, Nicky first came to prominence whilst attending the local CBS where he won a Munster Final Dean Ryan Cup hurling medal in 1953 when the school beat O Sullivan’s Quay from Cork in Fermoy by 6-3 to 0-2. Nicky played at corner back and the team who had travelled to Fermoy by train from Dungarvan were paraded through the town on their return by the band up to the school in Mitchel St. The club won its third Western minor hurling final in a row in ’53 and Nicky played at full back in a game that we won against Cappoquin by 3-8 to 1-2.

The emerging Quill also figured on the school teams that were defeated in two other Dean Ryan Cup finals either side of their winning one. In 1952 Nicky played wing back on the side beaten narrowly by Thurles CBS on a score of 6-4 to 6-2 and in 1954, he was full back when Limerick CBS defeated ‘the Brothers’ by 4-5 to 3-3.

1954 was the year that the youthful Nicky Quill began his adult career which would later see him play with many clubs as his occupation as a garda brought him around the country. He started as a corner back on our junior hurling team and the following year, still a minor, he was on the edge of the square when we played Abbeyside in the first round of the senior hurling championship.

Nicky Quill’s ability in both codes was recognised by the County minor hurling and football selectors in ’55, he was on the team that was defeated by Tipperary in the Munster hurling final and he also played against Kerry in football.

In 1956, the club was pipped at the post by Mount Sion in the County senior football final on a score of 3-2 to 2-4 with Quill featuring at wing forward and the same year he scored 4-1 in the quarter final of the senior hurling championship when we defeated a East Waterford combination by 7-1 to 1-5.

Nicky went on his travels after he left school and interestingly he won an All Ireland junior hurling medal with Kerry in 1961 when the Kingdom defeated a London side that also featured another former club player in Willie Barron. Certainly both players are part and parcel of the history of local GAA folklore. No doubt Nicky left his mark on other clubs in his varied career wherever he was stationed in years gone by.

The Dungarvan club extends its sincere sympathy to Nickys wife Jo, his children Fidelma and Fintan, his grandchildren, sister Helen and his brother Eddie and all his relations at this very sad time for them.

Organised in conjunction with West Waterford Athletic Club, plans are at an advanced stage for this year’s ‘’Run and Walk ‘’ which will aid the Dane Power Rehabilitation Fund. The event will take place from out club grounds, starting at 11am on St. Stephen’s morning and refreshments will be served afterwards in the club house.  There are two courses available to post Christmas dinner exercise enthusiasts, 2 miles and 5 miles and these are not races but participation events. 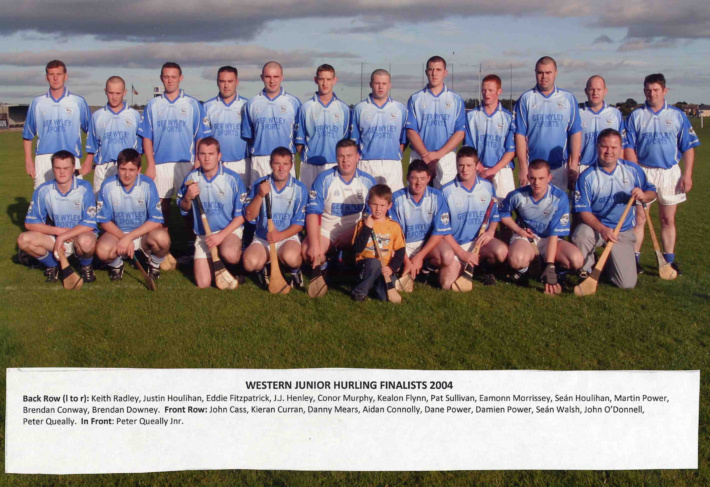 This event has benefited many causes over the years and this year the club is delighted to support Dane in his continual rehabilitation. Dane played with the club from underage to adult level, giving great service to us on and off the field, and this is an ideal opportunity for all who played with him, our membership in general and the welcome visitors on the day to support Dane in his recovery. Remember the date : St. Stephen’s Day, December 26th.

WATCH OUT FOR OUR CLUB ANNUAL ON THE SHELVES FOR CHRISTMAS.

FEATURING ALL CLUB ACTIVITIES IN 2018

INCLUDING OUR BOYS UNDER 7 TEAM. 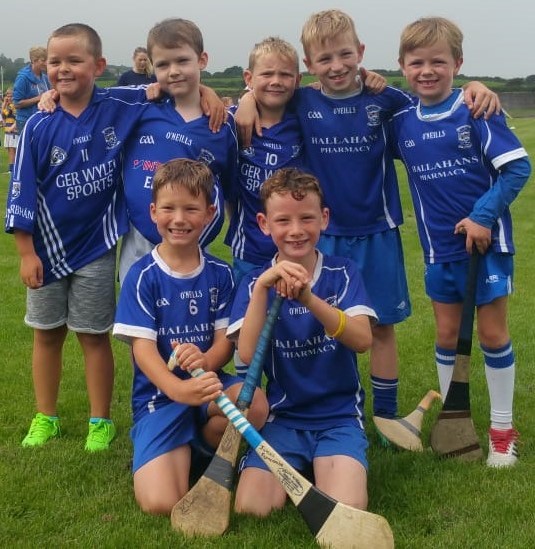 The provisional date for our County Junior ‘B’ hurling final against either Kilmacthomas or De La Salle is Saturday week the 24th of November at a Western venue.

The club’s 133rd Annual General Meeting will be held in the clubhouse on Sunday December 16th at 4pm.

Nominations for club officers and team managers to be sent to the club secretary by the 30th of November. 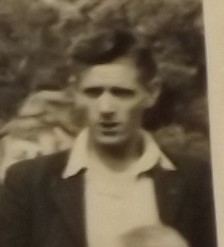 Sincere sympathy is extended to the family of Matty Fitzgerald, St. Bridgets Well, Dungarvan who died during the week.

Matty was a former club player in both minor and  senior hurling and senior  football in the 1950’s before he emigrated to England.

He won a County senior football medal from his corner forward position against Eastern Group side St. Otterans in 1954. In the semi final he scored the deciding goal with his fist against the Brickeys, final score was 2-5 to 0-7.

The final itself was abandoned due to the crowd encroaching on the field and the second day Dungarvan won by 1-5 to 0-7. In both finals, Matty lined out at corner forward. Matty also played senior hurling championship with the club.

In recent years Matty returned to Dungarvan in retirement. May he rest in peace. 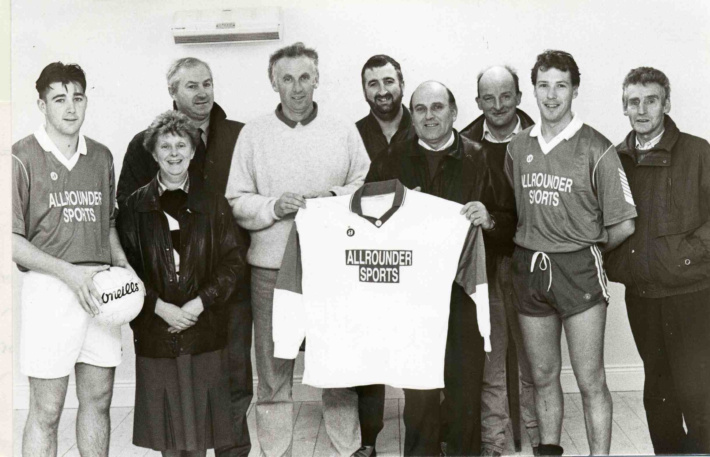