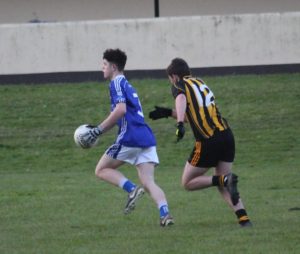 Our under 16 footballers were well beaten by Brickeys in Bushy Park on Monday evening. However, if we win against DLS at home this Wednesday May 2nd we will qualify for the semi finals of the County championship. 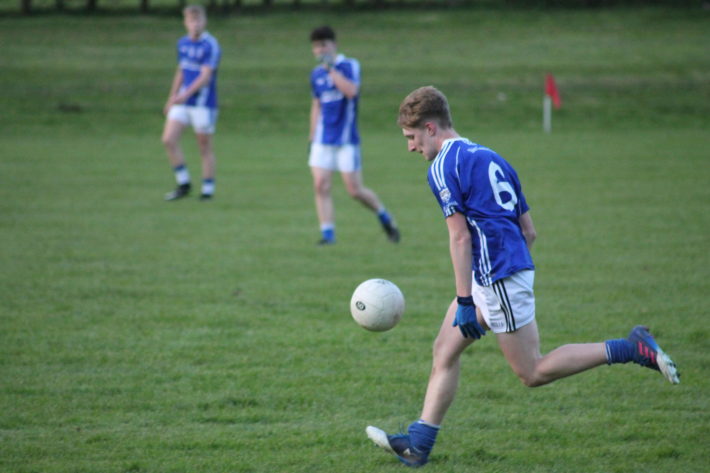 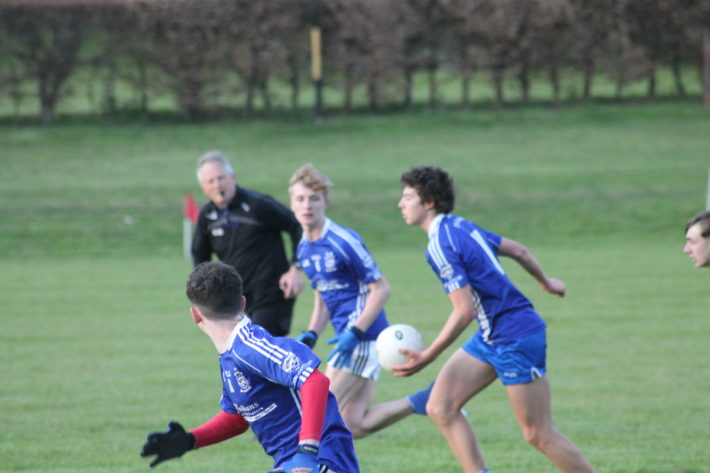 Presentation of a set of jerseys to our senior footballers in 1992 byPearse Moloney of the Allrounder Sports Shop. 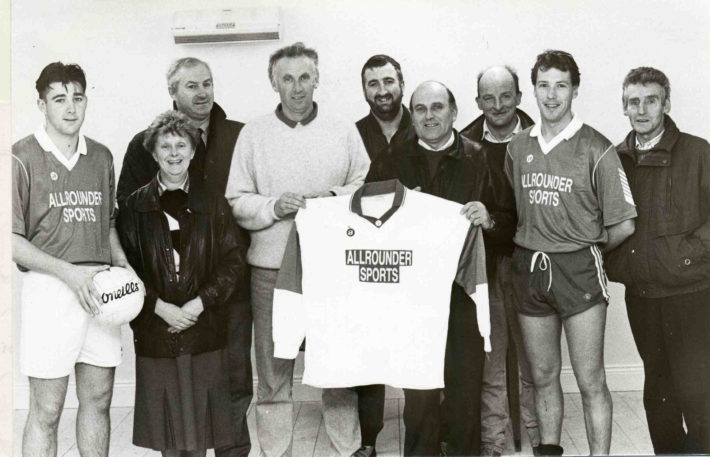 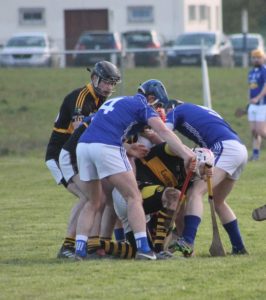 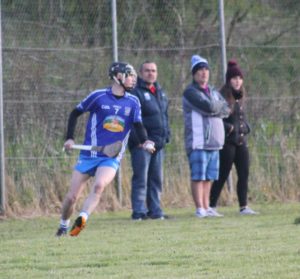 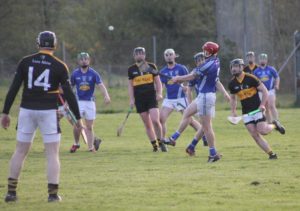 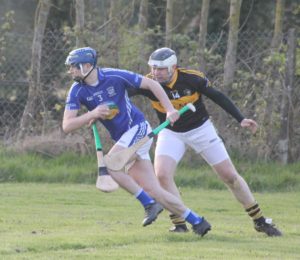 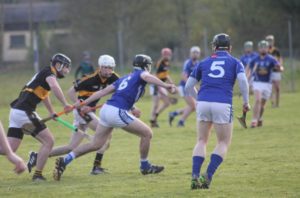 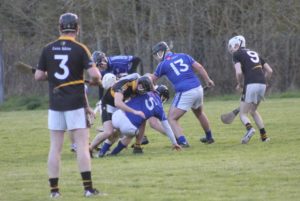 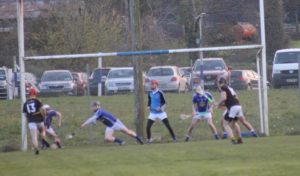 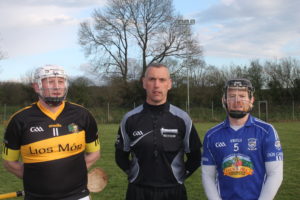 Two early goals per Sean Crotty(f) and Liam Ryan gave Michael McLoughlin’s charges the initiative and we led at the break by 2-6 to 0-2.

Lismore would have been much closer to us if they hadn’t struck so many free attempts astray in both halves and they were the better side for much of the second half.

We conceded a goal one minute into the new half but we finished strongly with Sean Crotty very much on target from placed balls.

Our defence was our most impressive sector, all playing very well and confining their opponents to just one 1-1 from play. Eoin Healy produced a man of the match performance at centre back and Derek Barry was soundness personified behind him at the edge of the square.

Key marksmen up front were Sean Crotty with 1-7 and Liam Ryan on 1-3. Our next game is against Fourmilwater next week. 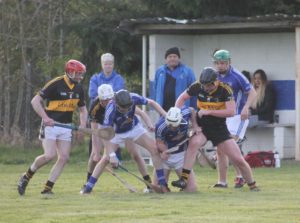 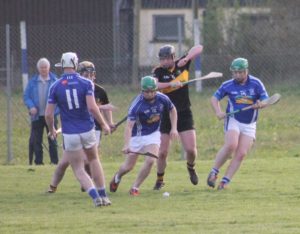 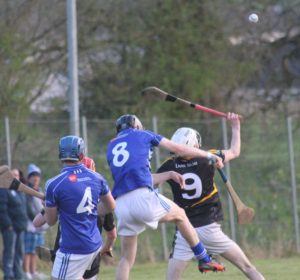 Senior football championship
Our senior footballers in beautiful sunshine in Bushy Park on Saturday afternoon last recorded a well deserved win in what was a high scoring encounter over Ardmore in round 2 of the senior football championship on a scoreline of  Dungarvan 2-18; Ardmore 2-11. Full match report next week.
Minor football
Our minor footballers will play St. Pats in the championship in Colligan this Friday night, 27th April at 7 p.m.
Under 10 hurling
Well done to our under 10s who participated in County Go Games blitzes in WIT arena in Carriganore on Saturday morning last in beautiful sunshine. Well done boys. Great hurling on display from everybody.
U-12 town and country
We play host to St. Oliver’s this Friday night, 27th April in the Town and Country hurling league. Throw-in at 6:30 p.m.
U14 camogie
The under 14 camogie team had point to spare over An Rinn in the Feile competition played in a foggy Old Parish on Tuesday night last, 17th April. The girls gave a real gutsy second half display to progress to the semi-final which was to be held on Sunday morning last in Carriganore. Result and report next week.
Panel: Kerry Dee, Abi Power, Katie Donnelly Caoimhe Meehan, Caoimhe Prendergast, Kately McGovern Aoibhe Bluett, Claire Whelan Power, Ellie May Power, Ellie Shead Hackett, Emma Fitzpatrick, Emma O’Neill, Kirstie Tutty  Walsh, Misha Lyons, Roisin Quann, Sarah Power.
Waterford u 16 camogie
Congratulations and well done to Waterford u-16 camogie who recently beat Cork in the Munster final, especially club players Mary Kate Prendergast and Clodagh Tutty. Well done girls. Waterford got the better of Cork after a thrilling game which needed extra time to separate them.
Senior camogie
Hard luck to to the Waterford senior camogie team who were narrowly beaten by Cork in the Munster senior championship played in Modeligo on Saturday afternoon last. The club was represented by Orla Hickey and Kaiesha Tobin.
Lotto
Lotto can be purchased online or from the following Hallahan’s Chemist Paddy Foley’s Bar, Country Store, John Walsh Spar, Johnny Lynch, Quealy’s Bar. Tickets are €2 each or 3 for €5.
Deise draw
Deise draw commencing in May with the first draw taking place on the 30th May. Draw runs for 6 months. €90 for 6 months or €15 a month. Many thanks to everyone who supports the deise draw.
Cul camps
Cul camp dates for Dungarvan are 23rd July to the 27th July. Bookings can be made through co-ordinator Niamh Harty on 087 9241532. Places are limited so be sure to book early.
Communion
Best wishes to some of our younger players who are making their First Holy Communion this Saturday. We hope you and your families have a lovely day. 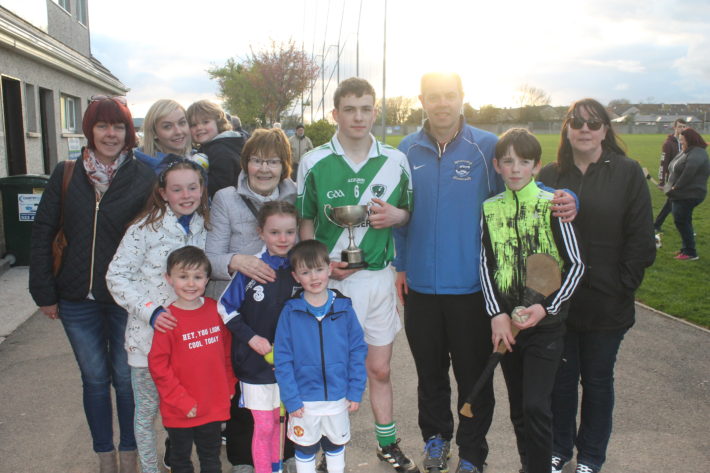 The large attendance in our club grounds enjoyed John’s tournament final last Sunday evening between ourselves and Clonea. Our visitors deserved their 0-3 win after a most enjoyable hour’s hurling.

Thanks to Maureen and family for coming along to present the cup and to Timmy Organ from Abbeyside for refereeing.

Captain of the winning Clonea side was Sam Barry and the man of the match award was presented to midfielder Richie Lacey.

The club extends its sincere sympathy to the Woods family of Caseyville, Dungarvan on the death of their brother Michael last Monday. ‘Healthy’ as he was well known was one of the outstanding characters in the town and very much involved in sport during his lifetime.

As well as Greyhound and pigeon racing training,  and following the sport of boxing from the ‘Street of Champions,’ ‘Healthy’ was a noted hurler with our club.  He played for many years with Dungarvan and he was on the Dungarvan/ Abbeyside combination that played New York in the Fraher Field in 1962.

‘Healthy’ also possessed a wonderful singing voice and it was on many an occasion that he entertained a gathering in a social surrounding.

The club extends its sincere sympathy to all of his family and his relations at home and abroad on this very sad occasion.

Dungarvan U10s ⚪🔵need your vote please .
You can vote every day until Monday 23rd 👍⚪🔵
LETS DO THIS click on the link below and submit your vote.
http://www.mcconnellbros.ie/…/local-a…/art-hurling-challenge
*you can vote twice through Facebook link and what’s app link* 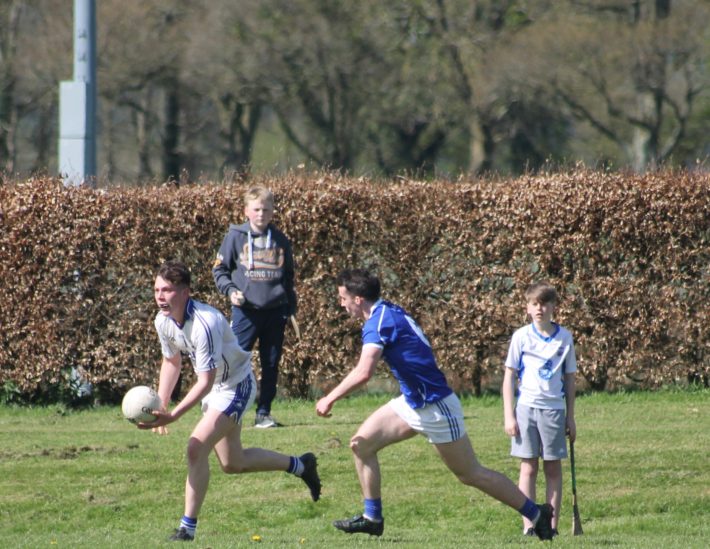 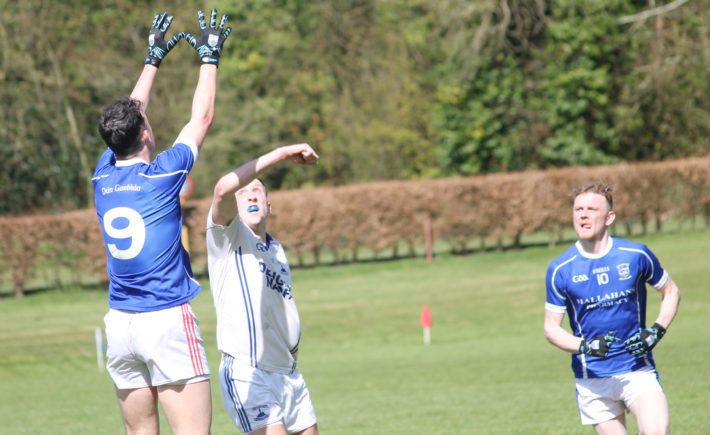 In our second senior football championship game since we returned to senior ranks this year, we showed a lot of improvement on our defeat to Portlaw last week when we overcame Ardmore in Bushy Park last Saturday afternoon by eight points. This was our first win I the senior championship since 2002 when we beat Ballinacourty in Round 2 of the championship by 1-12 to 3-3.

Last Saturday we led by 0-11 to 0-5 at half time with Gavin Crotty our top scorer with six points. Seamus Hannon added two scores in quick concession and Kenny Moore, Joe Allen and Patrick Curran also found the target.

When Luke O Callaghan was fouled in front of the goal in the 38th minute, Gavin Crotty converted the resultant penalty and entering the final quarter we were ahead by 1-17 to 1-8. Our goalie Mark Boland saved us on a number of occasions before John Gartland scored Ardmore’s second goal with five minutes remaining which reduced our lead to 0-4.

Gavin Crotty steadied the ship with a pointed free and Luke O Callaghan finished off the scoring with our second goal on the call of full time. 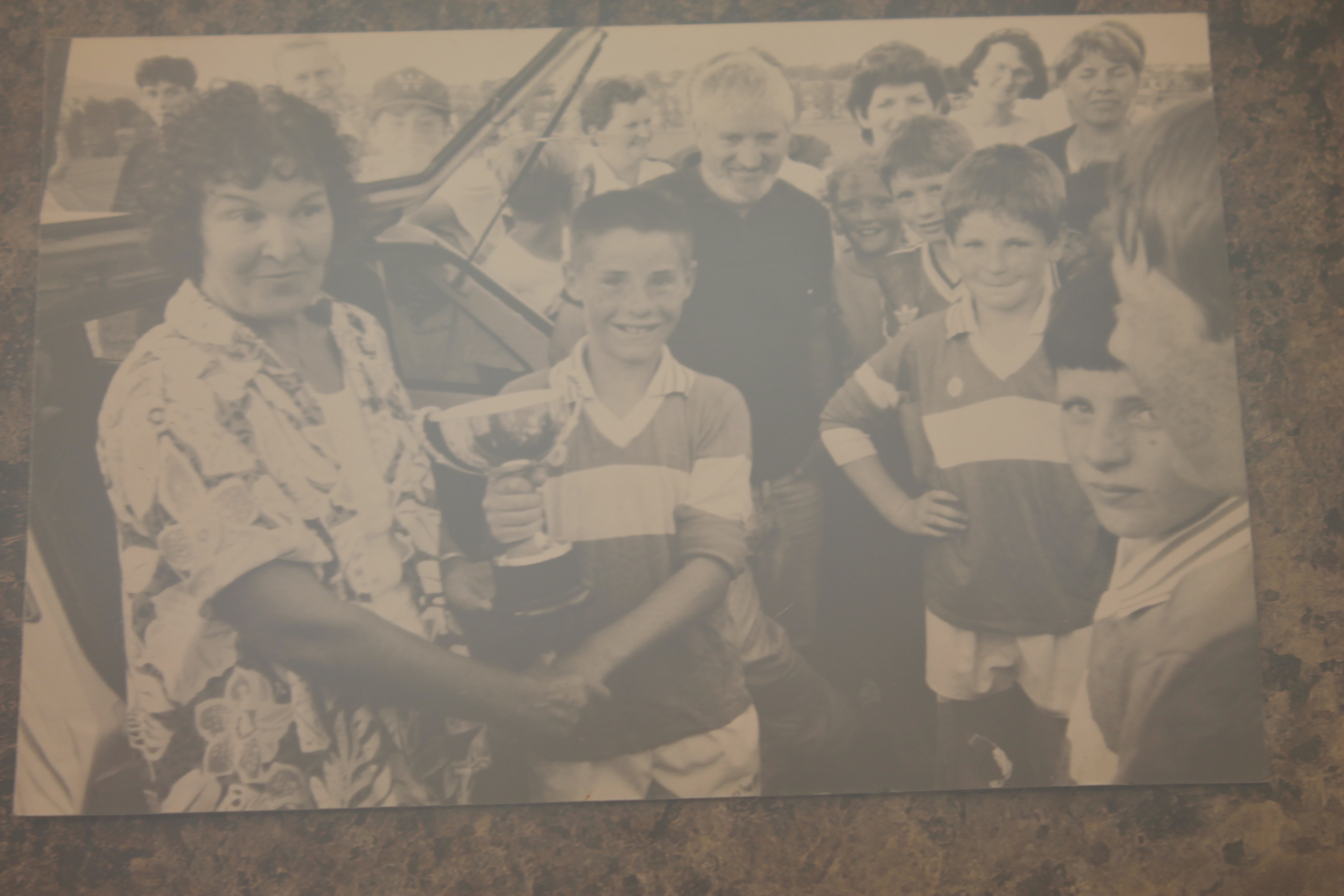 Our Junior hurlers play Clonea in the final of the John McLoughlin memorial cup in our club grounds this Sunday evening April 22nd at 6.45pm.

A native of Marlfield in Tipperary John worked tirelessly for the club before his untimely death in 1991. The cup was first presented for our juvenile hurling leagues and the first captain to receive it was Alan Harty in 1992 )see foto).

Refreshments will be served after Sunday’s game during which the cup will be presented to the winning captain and the Man of the Match  will be announced.

All are welcome out to the club on Sunday evening.