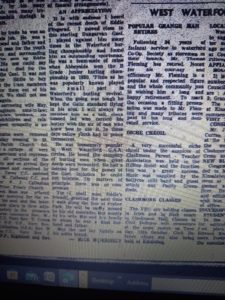 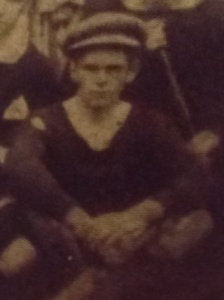 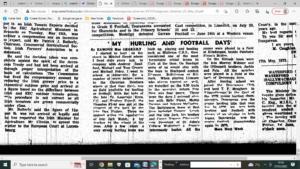 ‘Fitzy’ was one of the great characters of the GAA in the town up to the time of his death in 1976. He became one of a rare group of players within the club when he won senior hurling and football medals in the same year, 1926. He won the junior B hurling championship with Abbeyside in 1930 but overall, it is as a founder of a GAA club and encouraging boys to play our National games that he is best known for.

Fitzy formed the Cathal Brugha club in the town and he introduced many young players to hurling and football that otherwise wouldn’t have had the opportunity to do so.  A most unusual incident occurred at our own minor hurling fixture against Cathal Brugha  at the Fraher Field in 1937. As the teams lined up for the start of the game, a number of our players went over to the Cathal Brugha team and put on their jerseys.  We were left with eleven players and were well beaten on a score of 14-2 to 4-1. Later in the boardroom, Fitzy conceded the game because of their illegal fifteen.

Fitzy also built up a relationship with the nearby St.Augustines Secondary School who had their playing fields alongside Cathal Brugha Place. When Cathal Brugha were short some players, the boys from the Friary lined out with Fitzy, as in 1941, when ten of them lined out in the Western minor football final against ourselves and Cathal Brugha won by 2-3 to 1-5.

As time moved along, Fitzy became famous as an authority on the rules of the GAA and he was a regular attainder at Board meetings making his imput on matters controversial and otherwise. For a time he was also caretaker of the Fraher Field and in the early 1970’s he was a mentor with our juvenile teams once again.

When Fitzy died in 1976, the following tribute was made to him in the Dungarvan Observer. ‘’ He lived and died for the games of the Gael. He made hurleys and gave then to young boys who might never have known the game of hurling . Fitzy was an expert on the rules of the GAA and he was a regular attender at Board meetings’’.

THE weather was ideal for our st. Stephens’s Day event this and one of our largest attendances took off from the club grounds at 11.30am in a show of great support for the Mercy Foundation in Cork.

Over £4,000 has been raised and the club and the Callaghan family extends its deep gratitude to everybody who participated in and supported today’s activities. Thanks to ourclub members who helped out on the day.

The main draw will take place on Easter weekend 2023 or before this if the tickets sales reach its confined conclusion.There is a special offer for our confined draw. Buy 2 get one free!! (If you have purchased 2 tickets already you will be put in for an extra ticket). Please share to your friends, the link to buy tickets is below, on our website or ask for tickets from any committee member.

A big thank you to all of our former players who are getting behind the draw the past few weeks. Great to see the support they still have for the club

Our astro is available for booking for the Winter months at a very reasonable £70 per session. Bookings can be made directly on line or by contacting the club.

Due to the present weather conditions, the fields are closed until further notice.

In order to qualify for All Ireland final tickets ST holders must purchase for championship matches using their Season Ticket account. Again like 2022, there will be no physical cards issued. Link:http://gaa.ie/seasonticket. All Season Ticket holders from 2022 will have the opportunity to renew their Season Ticket.